As mentioned previously I wanted to try something a bit different and challenge myself. I selected the older 'Essex' miniatures range for this for several reasons:

It would seem that I last painted Essex Napoleonics back in 2007! These are a few pics taken back then and now in the gallery of my 'War Artist' blog. The basing style will be updated. 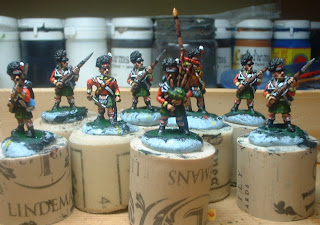 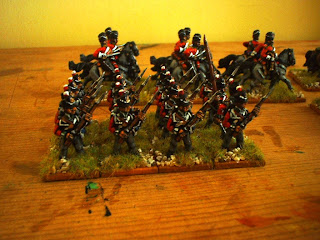 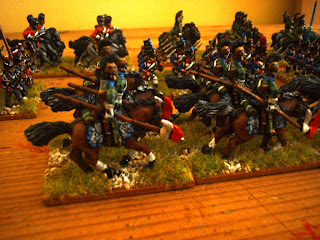 The first thing that struck me upon opening the first bags was how HUGE they seemed compared to the 6mm and 10mm figures I have been painting for a year or so now - should be a doddle really to paint these. I want to keep standards high, I don't like washes or the Army Painter type varnishes, I prefer to pick out my colours accurately but quickly and achieve a good overall impact within each battalion. Ideally I'd like to be able to paint a batch of 8 infantry figures (16 figure battalions) in maybe 1.5 hours to begin with until I get fully up to speed, that's pre- undercoated, start to finish in a single session. That's around 10 minutes per figure for a foot figure.

Retrospective.
Looking back through the blog last weekend confirmed to me where I went wrong with the 6mm Commands & Colors project - I'm convinced now that at the point where I had the original plain dotted 95mm hex terrain board (before I ruined it by attempting to 'texture' it) and the figures on the earlier 60mm x 60mm bases with the deployed skirmishers, was probably where I should have stopped (example pic below). I tried to go too far with it and lost sight of my initial aims, and in doing so definitely lost enthusiasm for it. By the time I was painting the 6mm Russians I was beginning to look backwards and knew I wanted to paint something in a larger scale.

Forward march!
I'm clear in my head how I want to approach this. Still Commands and Colors, but this time using a base of 4 infantry figures or 2 cavalry figures to represent a C&C single 'block', thus a British infantry unit will consist of 4 'blocks' and a cavalry unit of 3 blocks etc. This time it will no longer be 'Peninsular' based but all figures will be of the later 100 days campaign with the aim of eventually producing all of the required units for the Waterloo scenario. My main guide will be my old and battered copy of 'Regiments at Waterloo' by Rene North, published back in 1971.

Commission work - 20mm ECW Dragoons.
From this weeks output are these 18 ECW Dragoons on foot, I think they are Les Higgins? They are for the collection of Tony / 'Foy'. I have 2 x 12 figure matching mounted Dragoon units scheduled for the beginning of next week as well as some 'Boyne' cavalry for 'Old John'. Of course I'm continuing to add further 10mm AWI units as well. I have had numerous enquiries in the past week or so and I'm slightly behind with my email replies, but I'm just not in a position to take on any further work at the moment. I would be happy to discuss future projects of course, but it's important to me that I continue to deliver on time and don't get bogged down. I will catch up with emails over this weekend so please bear with me. 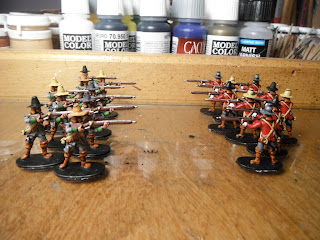 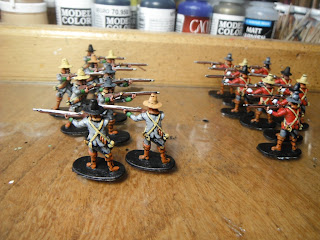