As I await the arrival of my first 'Russian' order from Baccus I have been refreshing my memory about the facts of the 1812 campaign which has greatly inspired and motivated me to get stuck into some more painting. I have also been reading a lot of online posts over on C&C Napoleonics regarding the new Russian expansion and the new scenarios. I'll probably focus initially on the line units, plus a couple of Grenadier units, interspersed with some artillery and command stands for contrast. After some thought I have decided to go with the pre 'Kiwer' codes first but will mix things up a little as I go. A few 'greatcoat' line units will speed up the early stages, although I will use a mix of codes from the range. Aim is once again to reproduce all of the 'blocks' contained in the expansion.

I have decided that the Russian infantry units will be based like my French troops, in a 3 deep column with mounted officer at one side, this probably being a more accurate way to represent them than in a more linear formation, like my British. I have great respect for those hoards of Russian conscripts who fought with such grit and determination, this probably comes from my long held interest in the Crimean War, where I recall British troops describing seeing the 'expressionless cold grey' faces advancing upon them, appearing determined and unstoppable.

As part of my 'prep' I have also been listening back through the 4 episodes of the 'Napoleonic Podcast' series relating to the campaign. While the 'Riley and Markham' combo is not to everyone's taste I know, I personally find J. David Markham to be fascinating guy to listen to on the subject and have really enjoyed listening to the 4 'Russian' episodes again as I paint. There's a lot of good information in there, and I think the 4 episodes must exceed 5 hours in total. I would recommend a listen if you are interested in Napoleonic history. Here's a link to the first of the Russian related episodes.

The Invasion of Russia - part 1.

Those square markers!
Well, I did indeed paint up the figures required for the experimental marker base, but subsequent fiddling around trying to achieve a convincing square formation on the base failed to work for me. It also became apparent that I would need to reproduce the different type of troops forming the squares, so for now that's on hold. Not wasted though as I added them as another conventional British line infantry base, as below. 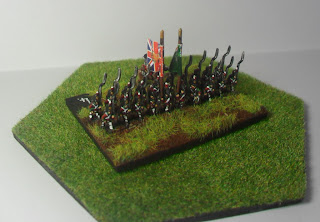 The dreaded flu bug again.
For the second time this Winter I have been struck down by a virus, resulting in 3 days spent mostly sleeping, tucked up in bed when I would rather have been painting soldiers! It's unusual for me to even get it once over a Winter, let alone twice. I did manage to get my C&C blocks stickers finished though, a most irksome job, but well worth the effort even though I may not even use them!

I have not mentioned the 'kittens' as they were HERE for some time I see, but I think they deserve a quick mention in dispatches for their most astonishing loyalty towards me as I lay coughing and spluttering in bed. All three spent the best part of 3 days curled up on or around the bed. 'Gibbo' the male cat, who spends much of his time sitting up in my painting room (he has sort of appointed himself as my assistant I think, so we have a sort of family joke that he is in charge of the packing department), would not leave my feet for much of the time I was there - even going a full day without his food - and attempts to carry him downstairs to eat, or to put him in the garden for call of nature would only see him run straight back upstairs again as soon as he could! Now I'm back to normal and so is Gibbo, all quite odd and very touching. He's back at work now too, as you see in the picture below. He also continues to grow at a most alarming rate with a huge bushy tail that even any self respecting fox would be proud of! 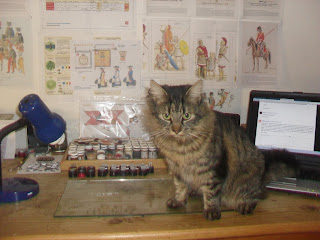 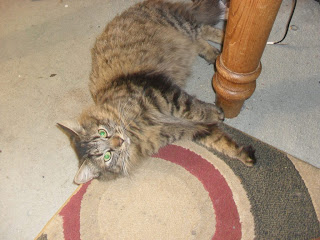 Quite a long enough post for now I think, I'll just add the pictures, and include one of the latest units for the collection of 'Old John' that I am painting, some lovely Les Higgins 20mm castings, this one being the 2nd Jutland Regiment of the Danish army. 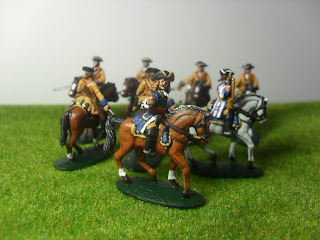 Edit: The prints stuck around my walls are for personal study use only, I prefer not to take expensive books into the painting room in case of accidental paint damage as I work.