It's been another really fine sunny day down here on the Kent coast, and I have been thinking about future plans for my project once again. It's clear to me now, that there is little point in simply adding more and more units to the French/British/Portuguese armies, as I have all I need for the scenarios now. The Russians are the main new project ( I now have 3 Cossack units painted), but I'll also be adding a few specific units such as the Scots Greys, British & French Allies etc towards the Waterloo scenario. I'd like to do something special with the Scots Greys, I'd like to really push the boundries of 6mm painting for this one special unit. I have no doubt that since painting the vast majority of the Napoleonic bases my skills have sharpened and my brush control is probably at it's best. I recall a 54mm artist back in the late Seventies name of Ceaser Milani or something like that, and he painted some beautiful Historex Scots Greys that I have never forgotten, he was the reason I took up painting figures.

Square markers.
This had been suggested to me recently and had been on my mind previously, I have decided to use up all of my leftover British and French infantry by making some C&C specific square markers, with officers, colours etc in the centre of a square of infantry. Pose is not perfect but then it's 6mm scale! I'll see what I can do with these chaps tomorrow. 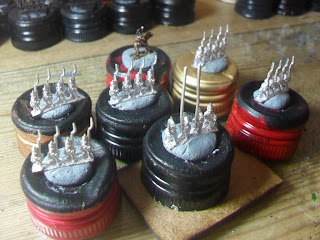 Vassal.
I'm really getting the hang of this now, it works well. Until such time as I find a local opponent I plan to exploit Vassal and it's opportunities for online games. After a bit of practice it plays extremely smoothly and is visually very satisfying.

Photos again!
Having completed rebasing the entire 6mm Napoleonic collection I could not resist placing them all on the C&C board for a few shots! It's nice now to be able to select units for games. 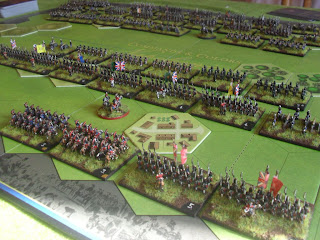 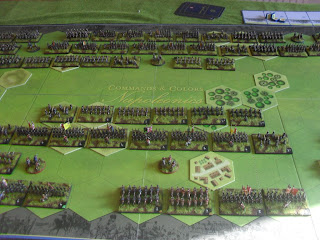 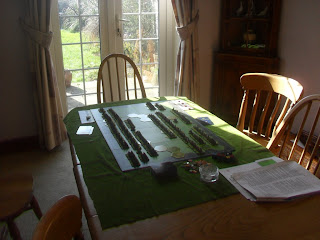 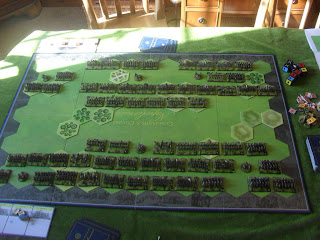 And finally....
I have been asked to paint some H&R Austrians. It's been something like 16+ years I was working out since I last painted a H&R Napoleonic figure. I'm a committed Baccus fan now but must admit to being surprised at the detail on these tiny castings. They might be old, but they are still impressive. This is the first bag test paint. 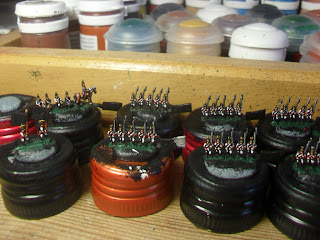