Commands & Colors Napoleonics with miniatures - the new set up at last!

Well, here it is. Finally I'm happy! A serious undertaking re basing something like 1300 x 6mm figures to fit the box game hex grid, but I think it's been well worth the effort so far, although I still have a lot of re-basing to do I'm just doing about 6 or 8 per evening.

Ever since I started following other gamers who play C&C N with miniatures on the board I have had this in mind. While some choose to use 4 or 5 20mm figures to represent the blocks on the board I wanted to still be able to use playing pieces that looked like blocks of troops. I also wanted to still reflect the basic tactics of the unit involved, columns for the French and line for the Brits etc. I had to lose a few figures per base on average, but now it's done I am extremely happy with the overall look, just what I wanted. The skirmishers removed from the front of the old bases have been incorporated into 'light' units to show the distinction on the board. I'm about half way done so far, but should be finished by the end of this week when I intend to play the very first scenario 'Rollica' and the plan is then to work through the entire scenario book writing up each battle for the blog and for CCNaploleonics forum. I enjoy reading different accounts of the same scenarios and they keep a tally I believe of victories over on the forum site.

Overall now this will keep me happy for the foreseeable future, at last I can play games and shift the board around the house as I need to. I can play upstairs in my painting room or take the whole thing downstairs to play on the dining table, my preferred space to relax. This has been motivated by many of the 'portable table' games and ideas from a round the blogs I follow, Ross in particular has been a great source of inspiration in proving that small games can be every bit as much fun as bigger games.

It's been hard going over the past few days, painting by day and working on this in the evenings, but the result is well worth it. I know this wont appeal to some gamers, but its perfect for me! My next planned purchase will be the Russian expansion of course and the start of the Russian units. As said before I still have in my mind the Waterloo project long term and infact this rebasing will now allow me to deploy 4 or 5 of these bases together on a purpose built terrain board, but that's for the future.

Here are some pics for now, hopefully the next post will feature a write up of the first scenario. 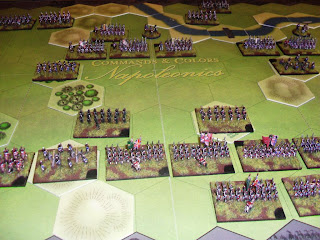 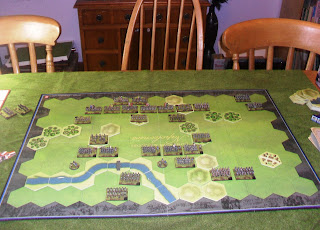 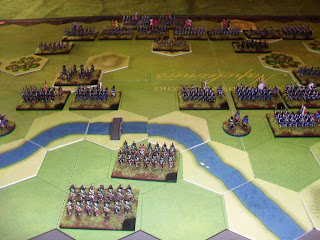 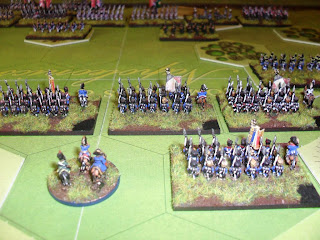 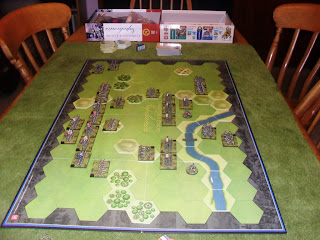 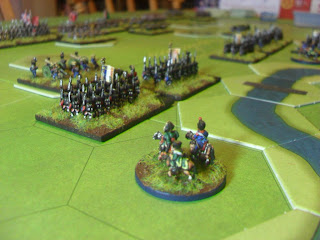