I'm gradually starting to feel a lot better, getting used to jabbing myself with insulin, (which is really not that bad), and the regular recording of blood/glucose levels which are far closer to 'normal' now than a few weeks ago so it's all been well worth it. I'm still weak, but I'm back walking the dog again and walking is something I plan to do a lot more of as a means of building up my fitness. I have stopped drinking and lost a stone and a half in weight so far so I'm trying to focus very much on the positive side to this recent experience.

Right then, lets get down to business. I present the first painted ECW Regiment of Foot, a generic red coated unit, (I will name it in due course), of 8 pikes and 16 muskets plus a separate 3 figure command base. I thought long and hard about how I wanted to base my units before deciding on this, the command base does not count toward the numerical strength of the unit so in Forlorn Hope terms this represents a 24 figures unit with a 2;1 musket to pike ratio. Note that the actual ratio of pike or muskets is not important in FH as the ratios can be randomly determined by a dice roll, but I prefer to stick with actual numbers. As things progress Foot units will be larger and smaller, for example 12 Muskets and 6 Pikes representing 600 men or 20 muskets and 10 pikes representing  roughly 1000 men, it's also possible (in the case of the Cornish troops) to have large combined pike blocks with muskets drawn off as a 'Forlorn Hope'. This offers some flexibility in building the units and is also historically accurate. FH suggests that very understrength regiments be combined into larger units, but Foot Regiments can be as small as just 12 figures (8 muskets and 4 pike).

I am considering this project as very much something that I will keep for myself, I have become aware of a slight deterioration in my eye sight recently, and it has made me think how lucky I have been to have been able to paint the thousands and thousands of soldiers that I have over the years/decades but you never know what the future holds so this one is for me to keep and enjoy. Eye test being booked for me, (thanks to the Paula Carr Trust), but the change has been only very slight, I can't see the fine detail on 6mm figures any longer and even these 15's are just slightly less sharp to my naked eye, that said it may be that the better part of six weeks away from the painting desk has caused me to lose my focus somewhat and I'm working on that! At 63 I guess I'm lucky to still be able to paint these figures without glasses so I'm honestly not complaining, just finding myself in a reflective mood about life in general at the moment.

Basing: I was going to change my basing style for this one and try the Vallejo base paste, but decided to stick with the fine grit and static grass. This works much better when the dry stone is totally soaked in the Vallejo Sepia wash before highlighting with buff when dry. I know the Napoleonics got a slightly watered down version of the Sepia and so it did not work as well, I think the difference is noticeable here where the thicker dry wash fills in between the grit and leaves a smoother surface. I'll add a few tufts once they arrive from eBay, I do like a bit of dressing of the bases.

Overall I'm pleased with this unit, future red units will begin with a darker base colour (burnt red) as this turned out a little bright. I went with the trusty satin varnish as the matt looked a bit flat to me and I like that slight lift the satin gives. Of course I have to add that the Peter Pig figures are a joy to work with, no cleaning up, just trim the pegs from the bases and that's it. The variation in pose/equipment within every pack means you can build nicely animated units and I fully intend to take advantage of the numerous ECW 'Head packs' that PP offers for further conversion possibilities.

Next I'm going to do another 24 figure regiment, this time a blue coated unit, then the first regiment of horse, probably 8 figures. 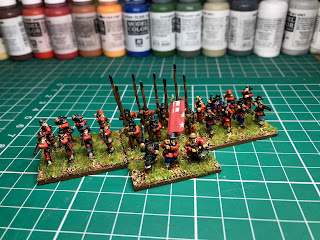 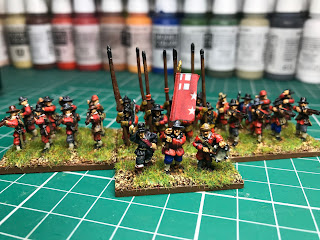 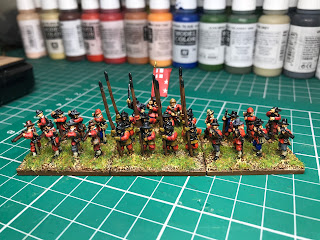 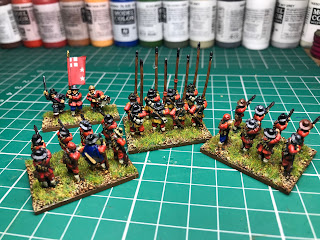 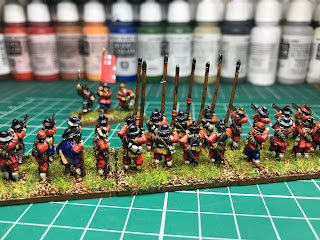 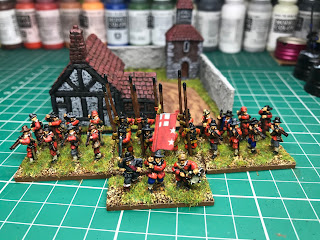