A gradual recovery & sorting the Pigs!

As I'm still out of action on the painting front I have turned my attention to doing a bit of planning for the ECW project as a means of taking my mind off jabbing myself with needles and monitoring, as my blood/glucose levels are very gradually being bought under control from recent raging highs! It's looking like I'm going to be insulin dependent, but to be honest at least I know I'm going to feel better and I'm getting excellent care in these difficult Covid times.

Today for the first time in ages I sat at the painting table and based the last three units of 6mm WSS figures for Gerry and have to say I really enjoyed it. Once the glue is fully dry I'll give them a soak of Sepia ink followed by some static grass and finally the red/blue edges to match the rest of Gerry's collection. This will complete the seven additional bases.

I have been giving much thought to this over the last couple of weeks and have decided to go with the Peter Pig plastic bases (40mm x 30mm) as my standard infantry and cavalry base. This means that my foot regiments will comprise two bases of 8 muskets and a central base of 8 pike plus 3 or 4 command figures and horse of multiples of 2 figures, probably 8 per unit. I considered deeper/larger Foot Regiments but have in mind the bigger picture of a planned 4 x 3 table where I want to be able to create a little bit of 'Olde England' with it's towns and villages, enclosures etc in modular form with the flexibility to lay out campaign based terrain. I want this to be a long term 'keeper' project where the terrain is as important as the model figures.

With another smaller top up order from PP that arrived this morning I made a start on sorting them all out into plastic business card boxes and it's a very satisfying sight seeing the lead mountain for the months ahead. Small additional monthly orders going forward should keep things ticking over nicely. I also have an order in to Battlescale for some of their half timbered buildings in 10mm scale.

Once I'm back painting again I'll be keeping busy with commission work for Old John and some ACW Peter Pigs for Graham C in addition to my own stuff. I doubt I will do any more 6mm's unfortunately as I have noticed it's been slightly harder to focus on the fine detail work in this scale.

My focus for the ECW armies will be Hopton v Waller 1643 from the Forlorn Hope army lists, but more in due course. 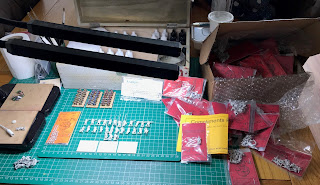 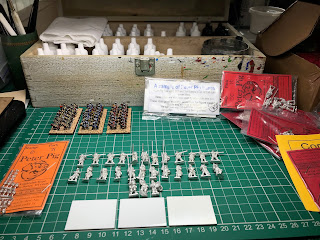 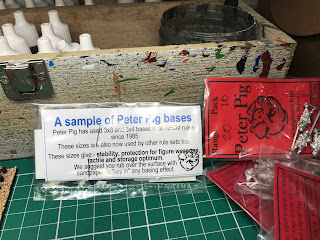 Below: One for Gerry (finally!). 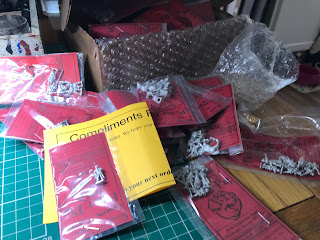 Below: The planned composition of the Foot Regiments, possibly two colour bearers in front rank if Martin at PP will allow me to vary the contents of the command packs as I believe is possible on request. 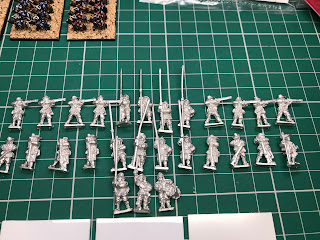 Below: left to right, Foot command, pikes, muskets, horse in helmets, horse command and horse in hats. Still to sort are artillery, dragoons, cuirassiers and a few other bags.