This week has been a bit of a change from all that Prussian Blue! I have on the go some 6mm WSS, 20mm WSS, the last of my 18mm Spanish Napoleonics and 3 more Prussian Generals for the C&C set up so individual bases. I started the week by finishing off two more Spanish line infantry bases followed by the last 10 militia figures which cleans out my supply of AB Spanish. With the last four Dragoons base coated I'm also out of Prussians now until my order arrives from Eureka who are waiting on a delivery from Australia where they are cast. No problem as I have plenty to keep me busy.

It had taken me a long time to get my eye back in on the 6mm's, Gerry has been patiently waiting for about 10 months now to add to those I sold him, again using up packs of Baccus castings from my drawer. The addition of the second painting lamp was a gamechanger, and I really enjoyed being able to paint these delightful little figures again. I was able to match the basing perfectly using the same materials and Gerry is very happy with them. I only have enough foot for two British and two French, plus a couple of additional cavalry units per side, but at the moment Baccus figures are like gold dust!

The 20mm Hagen's for John will be finished today. I have been experimenting with the white uniforms, starting from a grey base coat followed by a carefully controlled dry brush, taking care not to obscure the button details wherever possible before adding stronger highlights of off white as the final finish. I think this works well and avoids that flat white look. I have more of these to follow up with next week.

I'm particularly pleased with the Prussian horses. I started with my usual Flat Brown over black followed by a 50/50 mix of FB & Japanese WW2 uniform (!). This time I added final highlights of pure Japanese uniform which really works well as I hope you can see. This will be my go to method for my future lighter horses.

I'm now considering ordering an Austrian DBN army from Eureka, still not sure but they are very tempting. 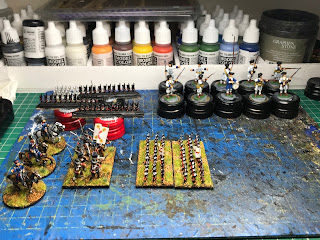 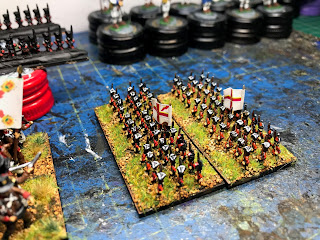 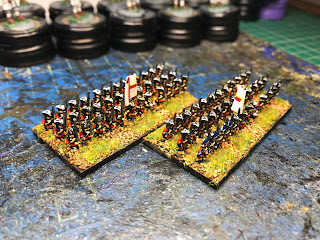 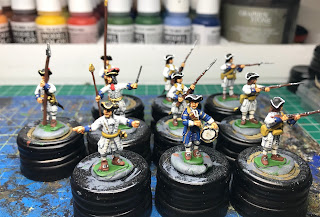 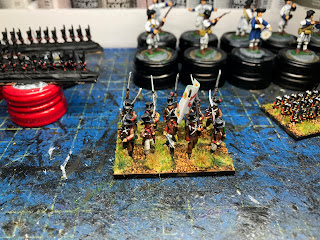 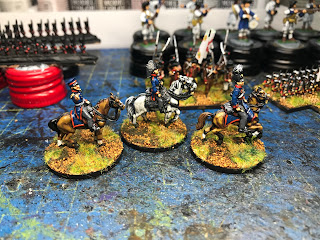 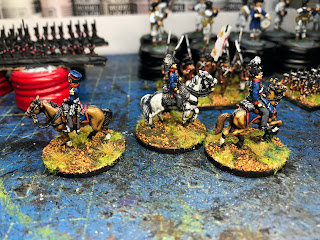 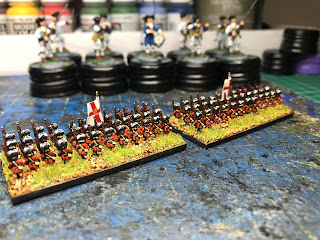 If we get a bright day over the weekend ( for photos), I'm planning a DBN battle on the card table, 1813 French v Prussian roughly 12 points per side. I have already sorted out the two armies in line with the rules army lists which are as follows:

*Swiss for now until I get the Bavarians painted!  **Dragoons.

This time I plan a start to finish battle report as it's about time this blog featured some actual wargaming!