Reinforcements arrive through the snow and ice!

My last two orders from Eureka arrived together yesterday, four weeks after placing the first of them. No complaints though as the AB's are made and cast in Australia so was waiting on arrival of new stock. Good timing as my own AB stocks were running very low! 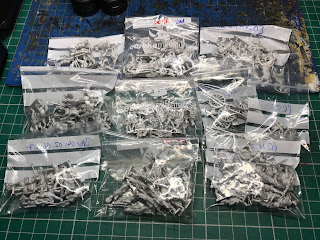 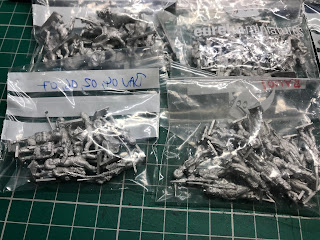 What you see are:

2 bases of Bavarian infantry (20) can't wait to get painting these.

2 bases of Chasseur a Cheval of the Guard (6) beautiful figures!

Bearing mind that in addition to the core DBN armies I am doubling everything up for use on the 125mm C&C hex grid this lot should keep me going for a fair while.

The last week has mostly been spent painting for Old John (20mm's) and Gerry (6mm's), but I did find time to slip in another 18mm French base Saturday and managed to get the Prussian limber painted Sunday. Unfortunately, having painted the six horse team I realised I could only fit four on the standard DBN baggage base....blast! Pleased with it though and I have held back the first Prussian v French game until this piece was ready for the tabletop.

For the week ahead I have on the painting desk the couple of Bavarian bases, more Spanish WSS horse for John and a couple of bases of 6mm WSS cavalry for Gerry. IN addition to this I'm finishing off some 40mm bases as the collection is being sold to a fellow UK blogger. I am very happy about this as they have remained in their travel boxes for over a year now and I cannot see myself being able to enjoy them due to lack of space in this house and I know that they will be played with and cherished in their new home. They will be on their way by end of this week and it paves the way for the purchase of an Austrian army by AB which will push the total numbers of my 18mm Napoleonics to almost 1000 figures.

Photos show the limber piece, French infantry and British infantry bases added last in the last week, the British and French were really just using up some spare figures until the order arrived. Also five 20mm Spanish Dragoons (by Hagen) painted for John featuring a green/yellow colour scheme. I always now use WW2 Japanese uniform as a base coat for yellow as it covers over black in a single coat and makes a great shade for Deep Yellow with Lemon Yellow highlights. I painted the wheels with a touch of Glossy Black before I took the photos but decided it was too strong so knocked it back to flat black again afterwards. 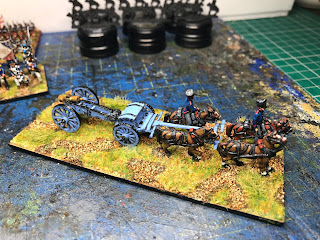 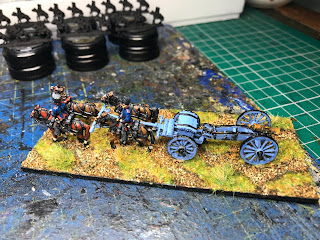 EDIT: the limber team after applying the Vallejo Blue wash to tone things down a touch, much better I think? 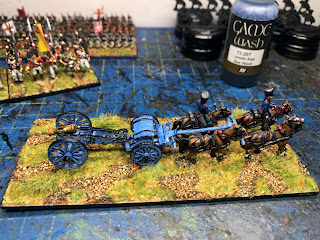 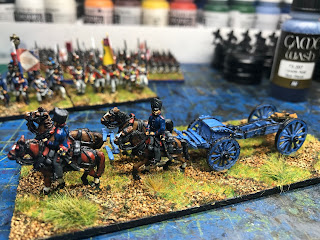 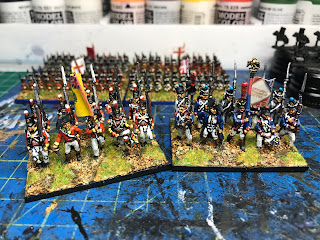 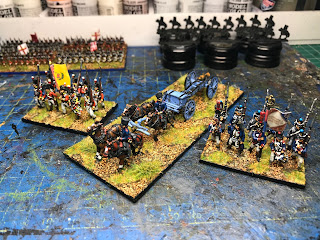 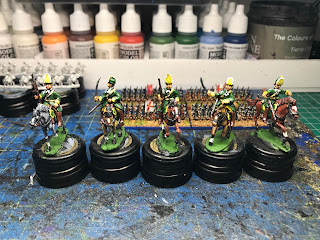 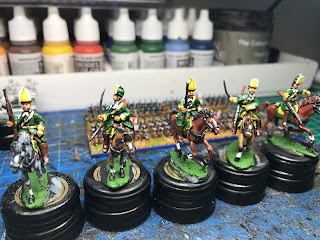 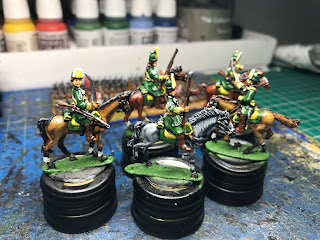 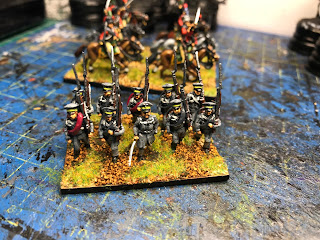