First of the Prussians & other matters.

Bloody Hell it's cold this morning, so back from a shorter than usual dog walk it's nice to settle down with a coffee for a blog update.

I had held off starting on the DBN Prussians until the New Year and so it was time to decide what to begin with. After consulting the Ospreys and from what I have seen on various 'vintage' blogs this is clearly going to be a most enjoyable army to paint. First up is a typical line infantry unit based on plate G from the Osprey book 152. I must confess to knowing little about uniforms/flags etc so it's going to be a learning curve and I'm sure the flag is wrong for this unit but I wanted to add one to gauge the overall effect of a finished base. The figures are by AB and are wearing covered shakos so sadly I don't get to add the pom-pom, but they look suitable dark and menacing I think.

As I'm now heading North out of Spain I required some new buildings so ordered a few more from Steve Clay at Battlescale. Whilst they are 10mm scale I find they work very well for my DBN village bases and with 18mm figures. I reconfigured a couple I made earlier to make more space to place a unit base in them. Under the rules these small bases are classed as Non Linear Obstacles but a couple can be placed together to form a more substantial Built up Area. I wanted to keep roads running through where possible so they fit with my home made MDF road sections that now includes a couple of 3 way junctions (thanks again to Tony Barr at east Riding Miniatures). I had also wanted to make a watermill for my river sections and the Battlescale model was perfect for this. I'm pleased how this is all coming together now with the option of a Peninsular theme or a more Northern European theme, and as all the road/river sections are 125mm or 250mm sections they work with the C&C printed mat or with DBN. The DBN village sections are 100mm squares so again can also sit comfortably in the 125mm hex grid. I have the option now of playing DBN games on the folding card table (2'6" x 2'6") or using the printed mat on a 6x4 table with doubled up units.

I have also started on some WSS figures for Old John. For these white uniformed units I'm employing a mid grey basecoat rather than my usual black and then giving them a careful controlled dry brush of 'off white' as a starting point. So far 24 figures painted (Naples & Milan) which are Les Higgins and now starting on some lovely Hagen figures you see below. These are rather elegant sculpts with nice long scale muskets. Also on the go are some 6mm WSS bases for Gerry. I must confess it's taken a bit of a while to get my eye back in the scale, but the additional lamp is making it much easier. 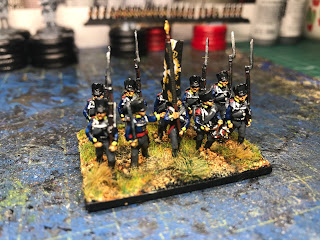 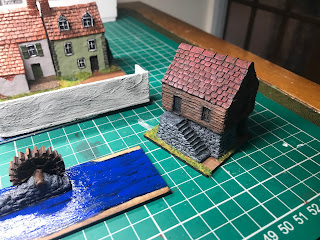 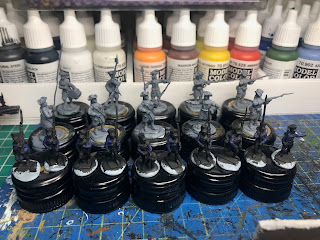 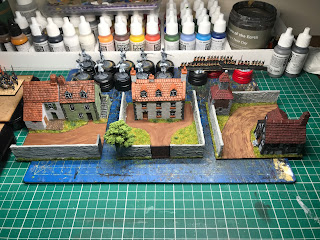 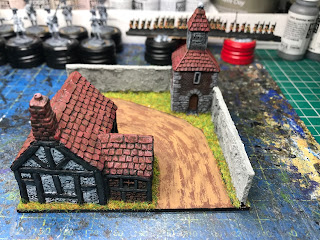 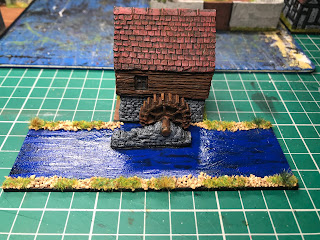 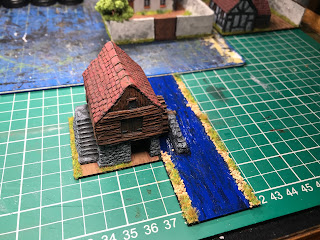 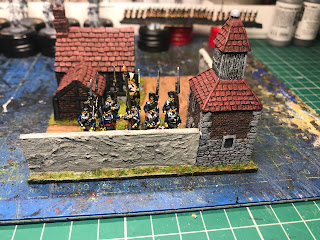 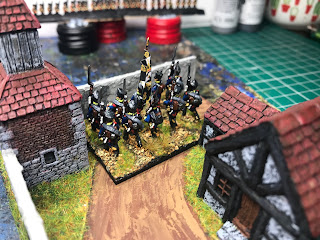 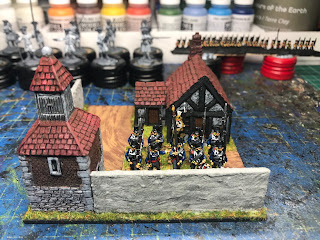 Some Les Higgins for John, red drummer as had a bit more lace added as he looked a bit plain beside the other drummer. 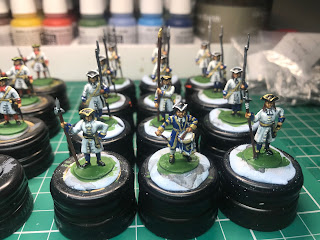 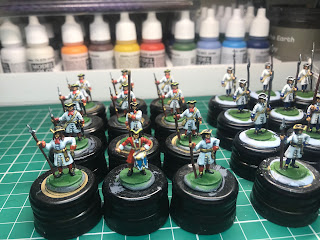 Image below shows how the off white drybrush is used to leave the lace and button holes showing. Next stage is to build up the white a little more carefully. 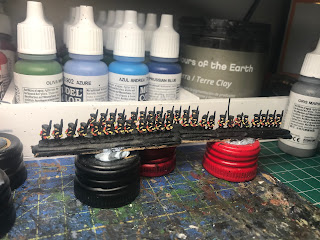 Below, nice detail on the Hagen 20mm figures. 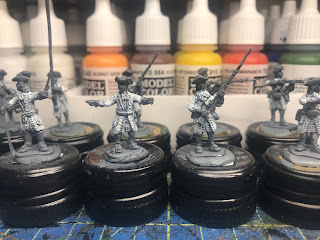 Finally for now we now have our first Grandson (Oscar Lee) who was born a week ago today to daughter Jess and partner Blake. Oscar completes our five- a- side football team of Grandchildren! Given the outrageous photo of 3 month old Daisy with her Dad Liam below we have offered to buy Oscar his first West Ham kit, I mean that is really not on is it.
Below: New arrival Oscar with his Sisters Lilly and Violet. 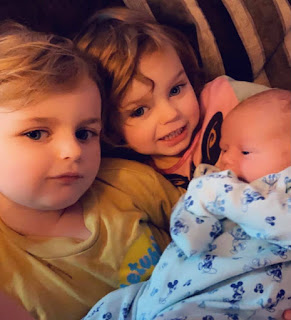 Below: Disgraceful images of poor Daisy with her Dad Liam! 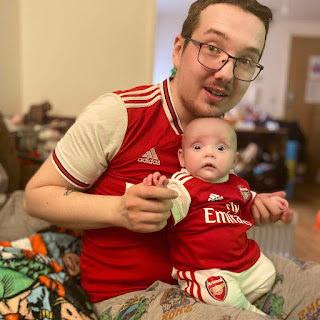