... another 40mm British Peninsular command set, and more 15mm ECW horse for Steve the Wargamer. I fancied painting some of the ECW's and a reciprocal arrangement was reached involving beer! Only 16 mounted figures, 8 are done with 8 undercoated for this week. I'll leave it to Steve to show them in full on his blog once they arrive back home, but here is a quick sneak preview, an absolute joy to paint. 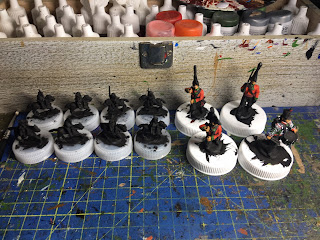 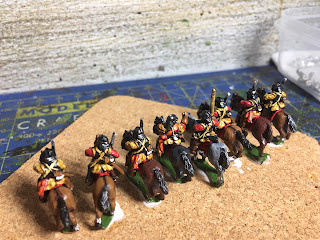 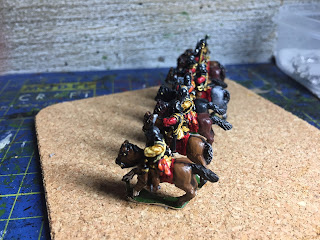 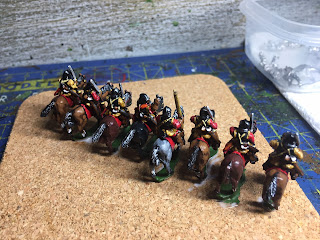 These 40mm's are the last of my stock of figures,( well I do have numerous Highlanders but have no plans for them as yet as I already have the 92nd,) so it's time to stock up, Andy is holding more for me. I spent an enjoyable hour or so last night working on these 4 whilst listening to The Napoleon Bonaparte Podcast, number 19 'The Peninsular War - part 1'. I was introduced to these several years ago by 'Foy' and they greatly enhanced my understanding of the Napoleonic Wars so I plan to go back through them once again whilst painting. The episodes relating to the Russian Campaign of 1812 were particularly good I recall.

I'm still trying to work out how best I can use my 40mm's on the tabletop without having to deploy a huge table and tons of terrain. Recently I came across the DBN rules (see below), and the more I learn about them the more I think they could work. A 6 x 4 table with all units on standard 120mm frontages (12 foot, 4 cavalry, 1 gun and crew), would be very practical I think, no  re-basing, just sabots to test this out. I really like the way they play, very simple but that suits me. Rather than me trying to describe how these rules work a good introduction is this 12 point battle in 15mm scale, victory goes to the player who destroys 5 enemy units and they play with just a single D6 per player. I'm giving this serious consideration.