Some Swiss and smarter British!

With the French 40mm's now organised into five battalions of 24 figures plus command I found myself with four fusiliers left over and four unpainted Grenadiers left in the drawer. Having decided that battalion number six was going to be Swiss, I wasted no time in producing this little group being the first figures towards the next unit. The officer was also a spare and he got a repaint. Blue appears a little light here, but suffice to say I'm rather pleased with them. 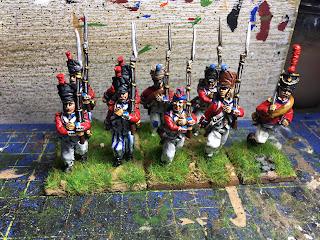 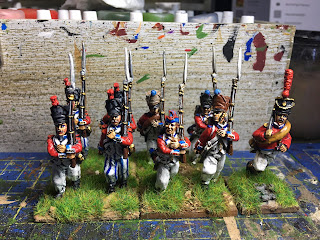 Some might recall that when this collection arrived in Spain back in May, a number of the infantry were as described by Andy, 'blocked in'. I have since been gradually working through those figures, bringing them up to scratch. This British battalion was built from those figures with additional command figures painted my myself. Basically it involved repainting the white belts and lace etc, working on the faces, repainting the facings and finally giving the trousers a repaint as they had been given a kind of Army Painter dip treatment that did not appeal to me. I used Ivory directly over them, leaving some of the shade showing and I'm much happier with them now.


The Highland battalion is also due for a but of a touch up to those kilts again, while I like the pattern the spacing is too wide and I think a few more lines will improve the look. Some of the faces are still a touch too 'toy soldier like' mostly those painted by myself last year, the command group won't be touched though, I love the piper with his ruddy complexion. 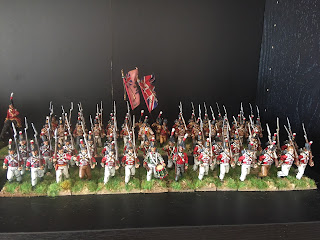 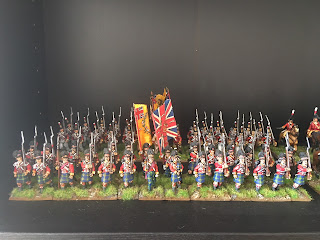 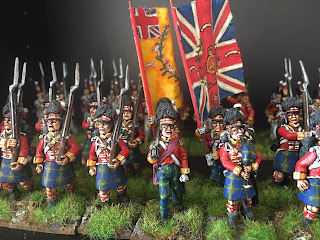 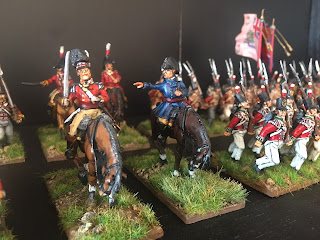 I have also been giving some thought to the inclusion of the mounted officers and decided they look better without them, allowing the colours to be closed up together. This will free up the mounted figures to create a couple of command bases, 3 figures and two figures. I'll also do the same with the French battalions.

The lovely Spanish gun team with the huge 12pdr based on the 1957 film 'The Pride and the Passion' has had a good dusting, it makes me smile every time I look at it. Andy (Copestake) tells me that it was created from various ranges and is not commercially available as a single piece so it's quite unique. 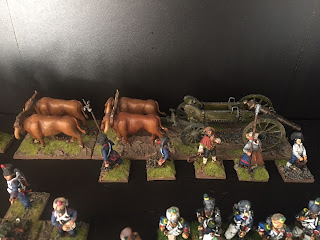