It's touching mid Thirties here now, and we have moved to a different rented villa with views down over Calpe and the rock, there is a pleasant breeze, and I'm sitting by the pool updating my blog. Our new home has similar views down over Gandia, slightly further South along the Costa Blanca, towards Valencia. On Wednesday we are to attend the Notary's office in Oliva along with our excellent solicitor Josefa when the purchase will complete and the house will be ours. This one is completely un-furnished so are on the hunt now for new furniture, fully modernised and far more modest than the huge villa we initially went for, but we know we are doing the right thing, it has a lovely homely feel and a large infinity pool shared between just 6 properties in a gated community,(which also means shared costs of upkeep). Our neighbours are Spanish and German.

Meantime I have continued to unpack the 40mm Napoleonics, and have to start by saying what a brilliant job Mrs 'Big Andy' made of the wrapping up, not a single broken bayonet or sword, even the extra 'blocked in' figures all individually wrapped! I'm going to really enjoy finishing off the blocked in figures, adding detail and shading etc and generally bringing them up to the standard of the completed figures. I'm really pleased with them, and have organised them into 8 figure Sharp Practice companies. With a total of about 300 figures it did occur to me yesterday that with additional command figures I could organise them in 24 figure units for Muskets and Marshals instead, possibly for small games given the scale, I'll set up a couple of 24 figure battalions for the next post as an example. Anyway, here is what came out of the unbased/unfinished box yesterday and next time I'll feature some of the artillery and foot, along with the mounted officers. 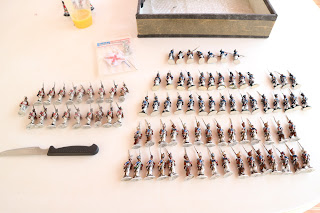 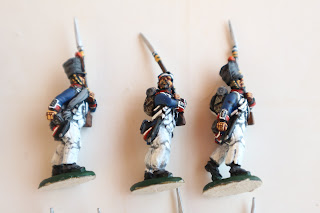 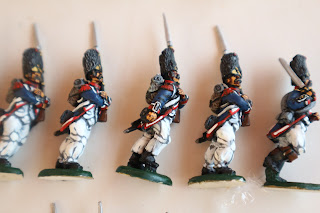 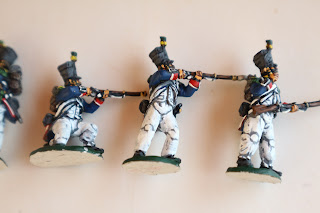 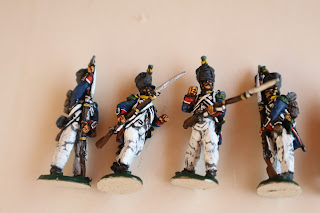 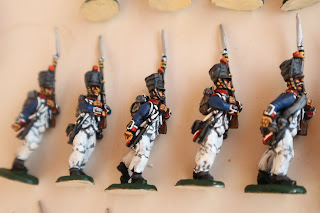