Following on from yesterdays post here is the report of the game. As I said, I just wanted to get everything painted so far on the table for a battle and so decided on a simple attack/defence situation, with the Russians as defenders of a three hex town plus a redoubt. I formed up the French in classic style with light infantry beginning mostly under cover of the woods, backed up by solid columns of line infantry supported by artillery. Plan was to open the battle with a general assault on the town, hoping that the defenders would be softened up by the artillery before the lights emerged from the woods to lead the attack followed by the line troops. French line infantry throw an additional dice when fighting other infantry, which I hoped would go some way to compensating for the -2 dice when fighting against a defended town hex or -1 against field works hex. But things did not go to plan.

I dealt six card hands in the hope that a good spread of command cards would help keep things flowing, but the French hand was weak in centre cards and frustratingly it remained that way through the game. As a result the French were unable to press as I wanted through the centre and I was forced to hold back a 'bayonet charge' card for several turns as I just could get the French infantry into the position where I could use it most effectively. By the time I could the Russians had gained the upper hand in Victory Points, mostly by ranged combat and a cavalry charge on the left flank where cuirassiers saw off two units of light cavalry, forcing both to retreat with losses.

The French light infantry went forward and exchanged musketry, but the -2 dice throws were telling and they suffered heavily from musket and artillery fire. The Russian command hand was solid, a good spread of cards and some valuable centre cards plus a 'fire and hold' card. French artillery were advanced to within 3 hex range but were out gunned by the Russians who forced them to limber up and retire, which in turn caused something of a bottleneck just as the infantry were trying to get forward. In C&C Napoleonics there is no 'passing through' or 'passage of lines' so it's important to keep this in mind when planning attacks as things can get stalled and any troops falling back on flag throws can find themselves in a situation where they lose additional blocks as a result of not being able to retire full distance. So you have to keep troops well supported in order to cancel out flag rolls. but you also have to leave spaces for units to advance or fall back through, a key skill of good C&C game play I would say.

The cossacks proved pretty much useless I have to say, they were held back in order to attack depleted French units, but even a combat against a single block French light unit ended with the cossacks removed from the table. A similar attack on a horse artillery battery reduced to a single block also ended in defeat for a two block cossack unit, fortunately no Victory Points are gained for destroying cossack units.

When finally the French infantry did close with the Russians defending the town on the bayonet charge card luck went against them, and in one combat an intact Russian battalion 'battling back' threw two infantry symbols and two sabre symbols routing the French battalion and gaining a victory point in one swoop. Two more victory points were gained by defeating two of the French light units, who suffered heavily.

I ended the game once the Russians had gained five VP's and to be honest the momentum of the French attack was lost by then along the centre. game lasted under two hours and was great fun to play. Maybe the three hex town was a little too strong, but the French plans were badly affected by the lack of central command cards and line infantry units just could not get up fast enough to press the attack. On a positive French note a unit of dragoons routed a unit of Russian heavies for a VP, but this had no impact upon the main situation.

As usual I took pictures at various stages, again some are not great but will do to illustrate the flow of the battle. All figures are by Essex Miniatures of course. 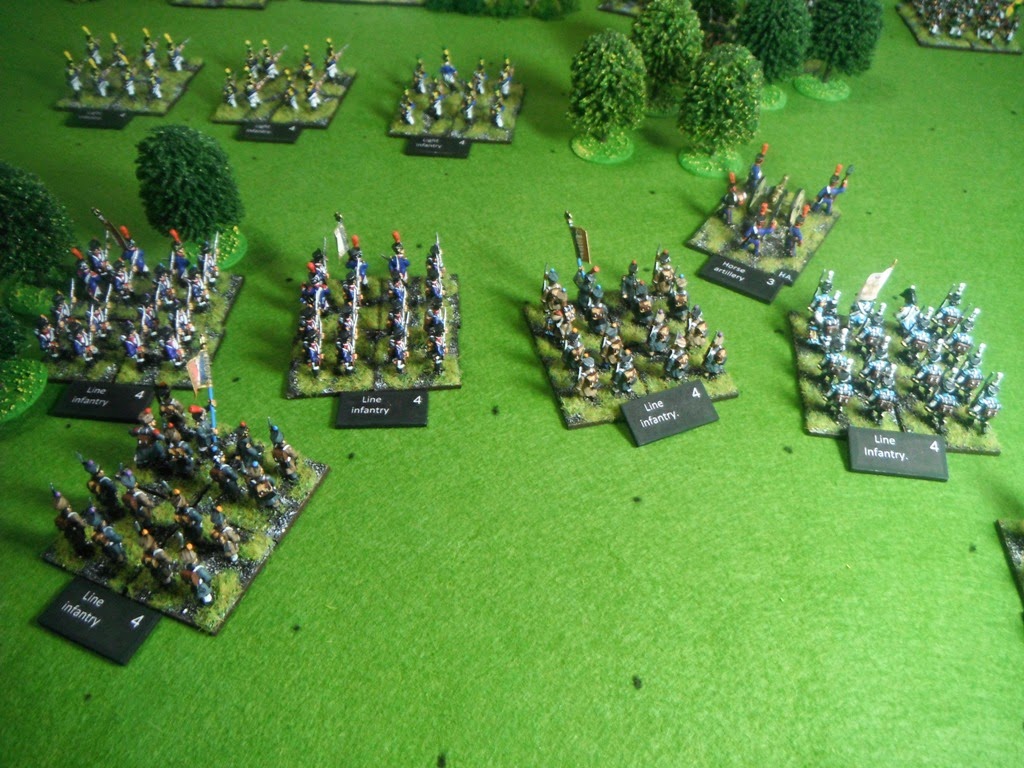 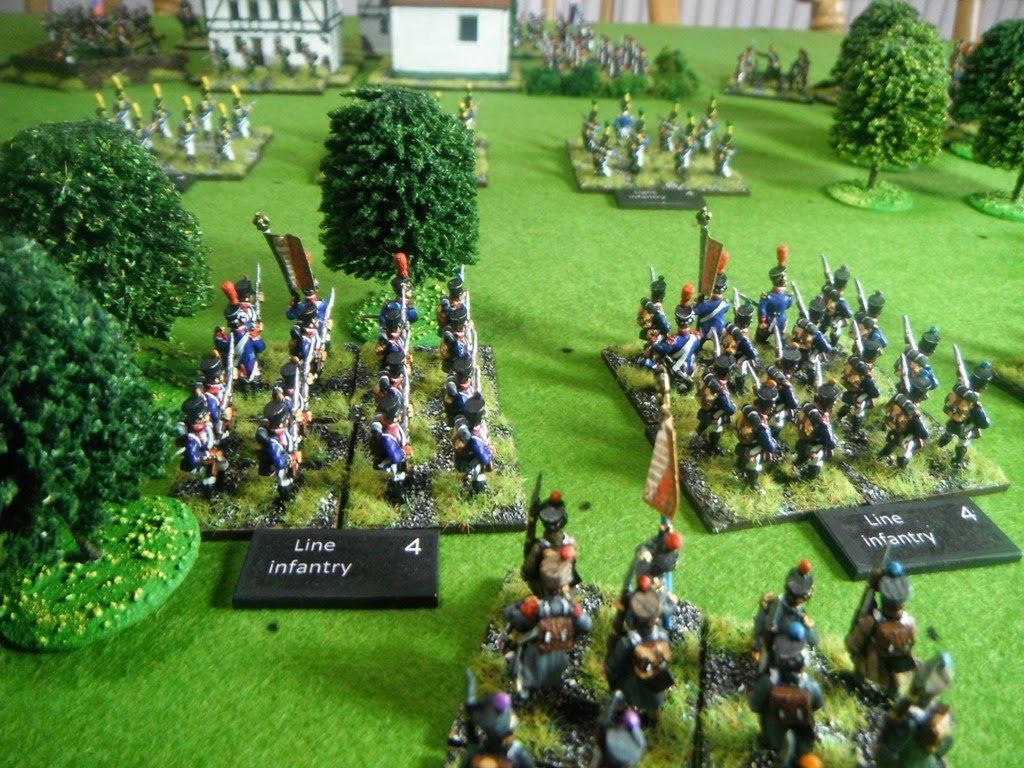 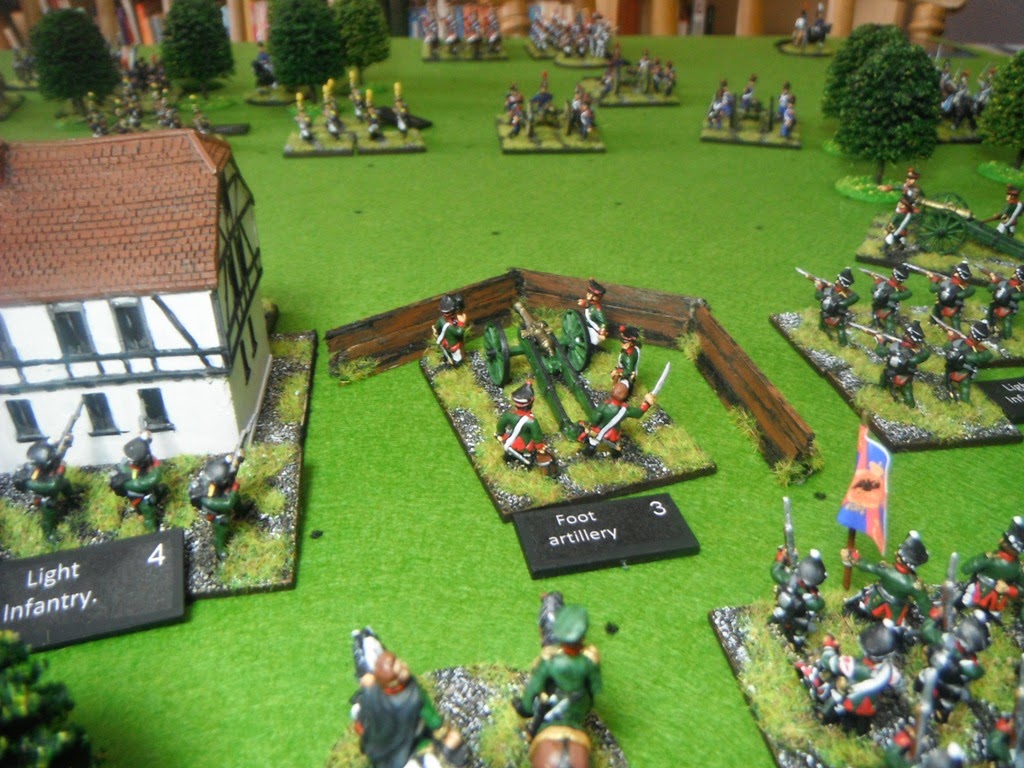 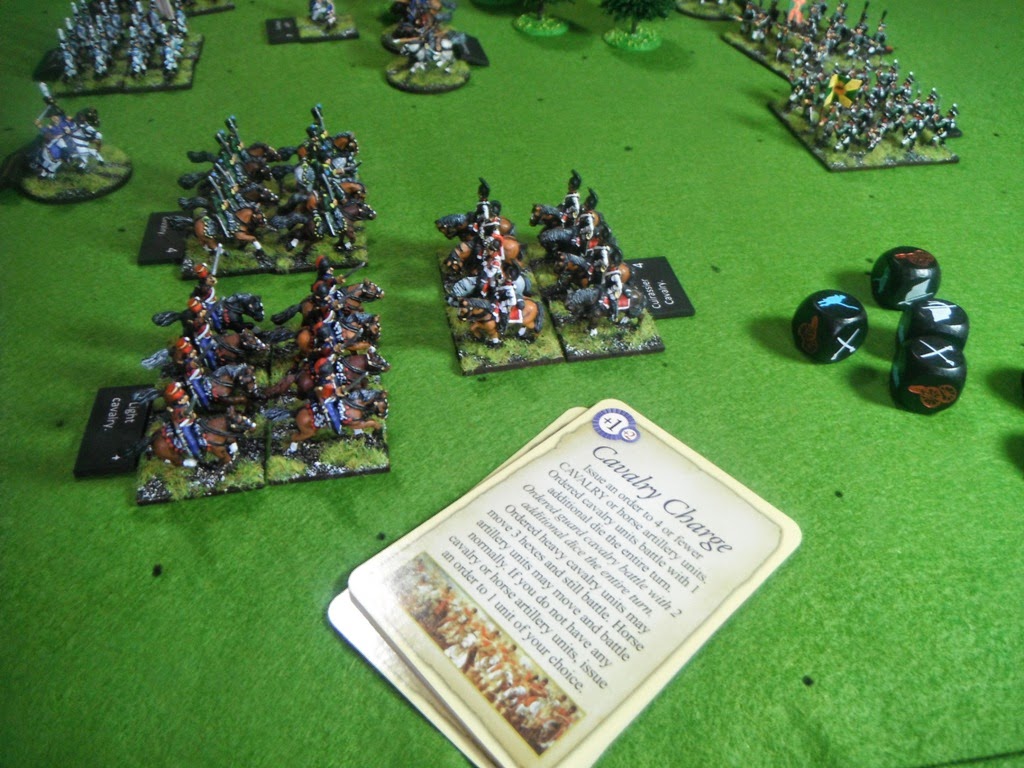 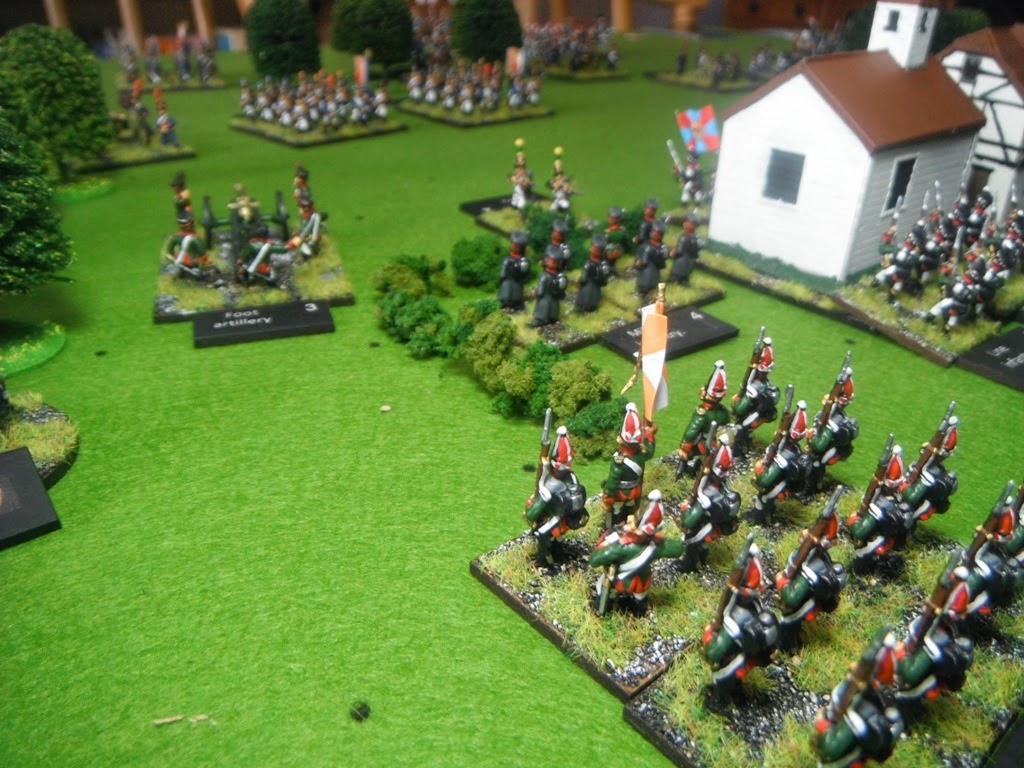 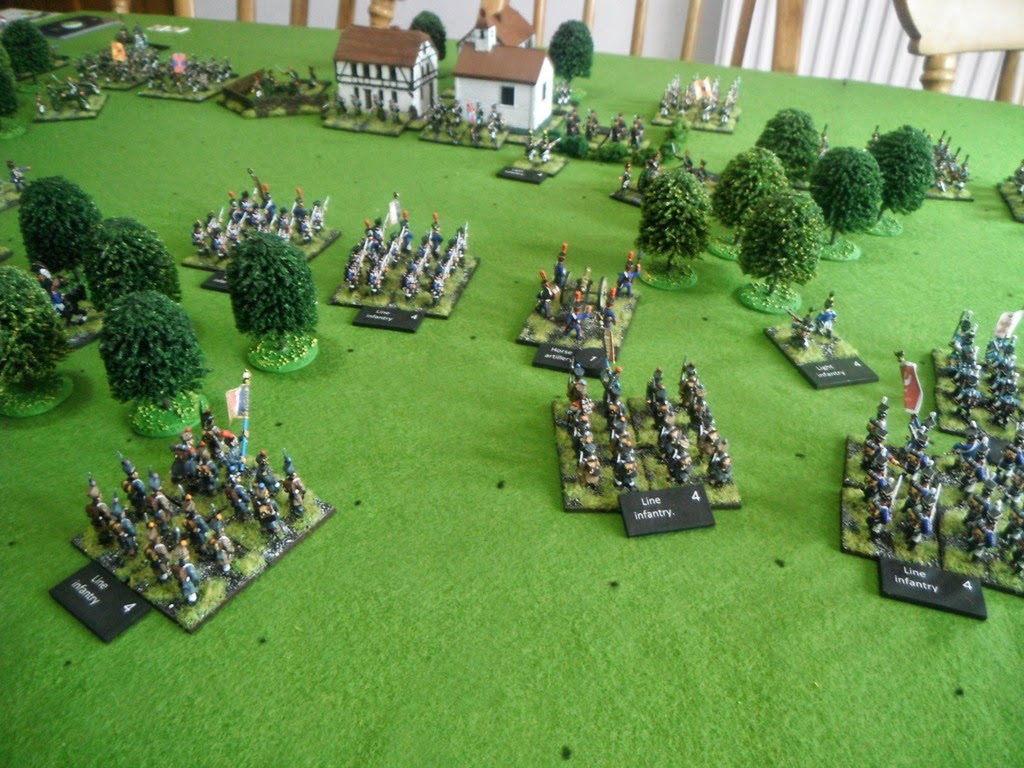 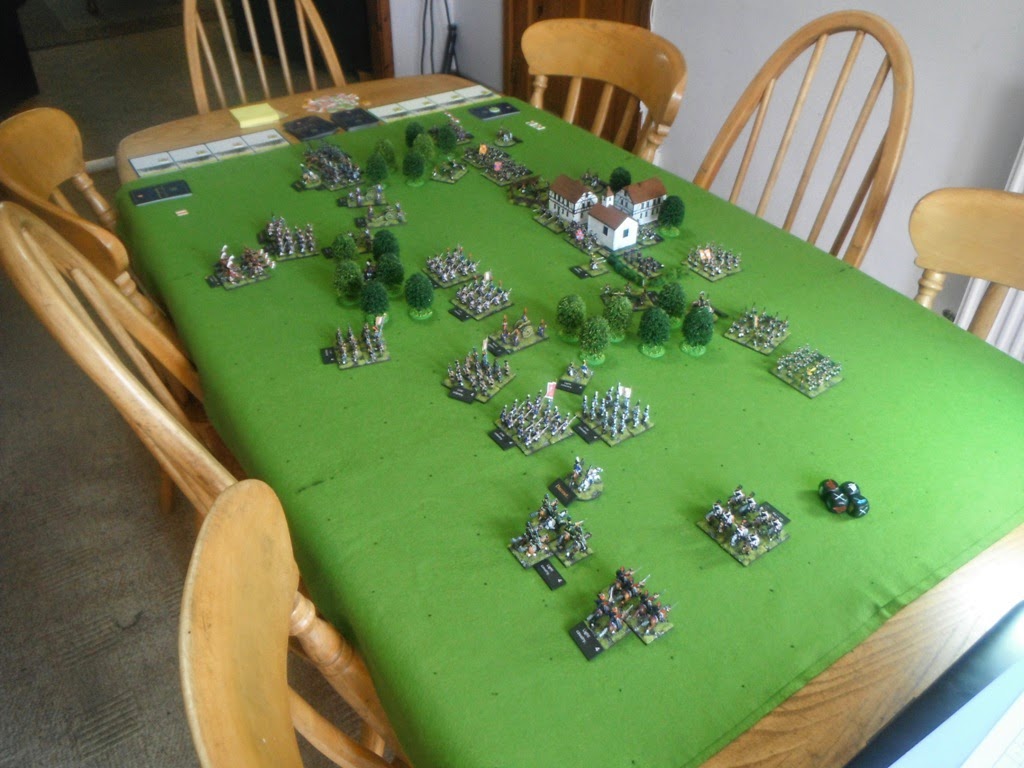 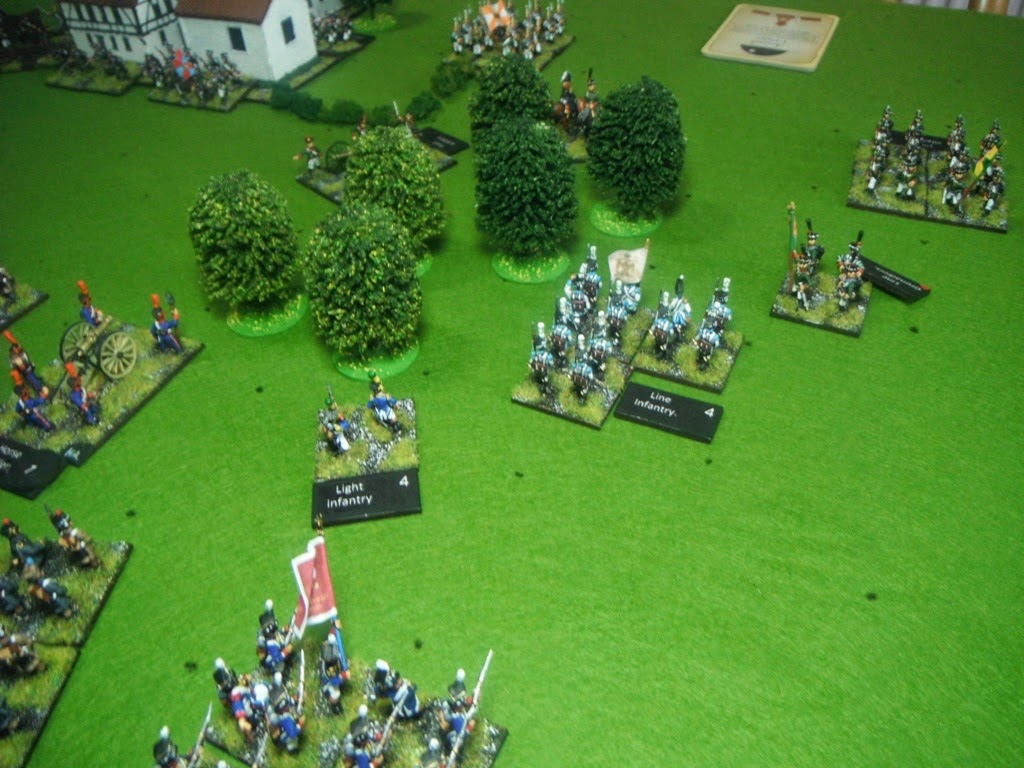 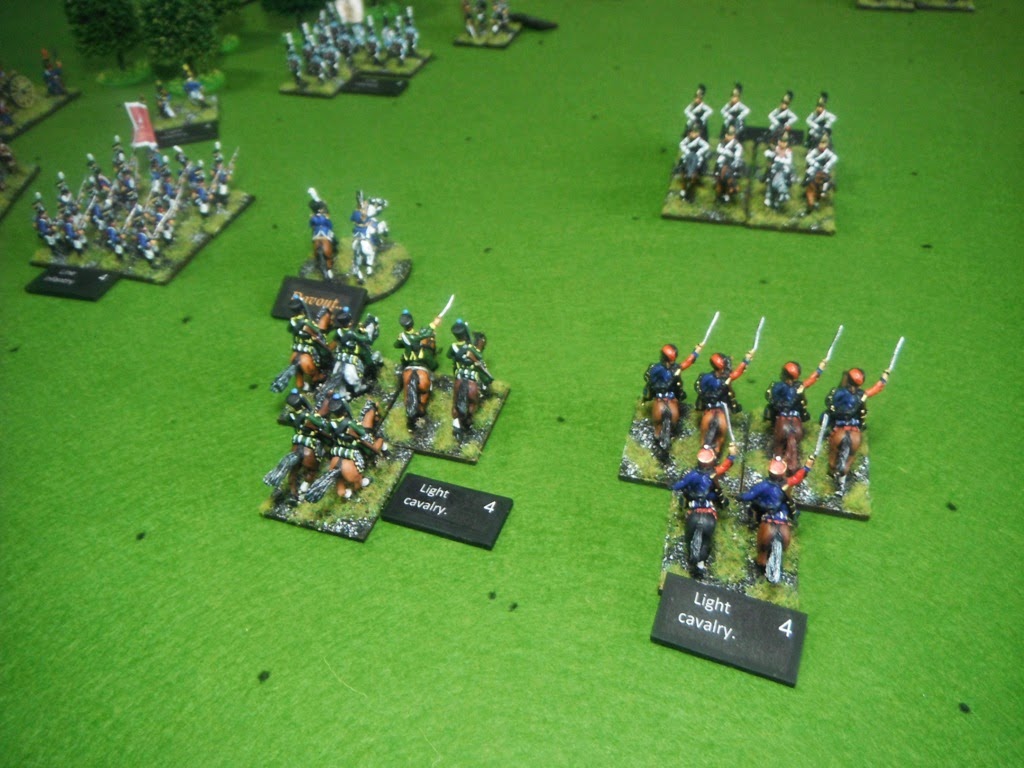 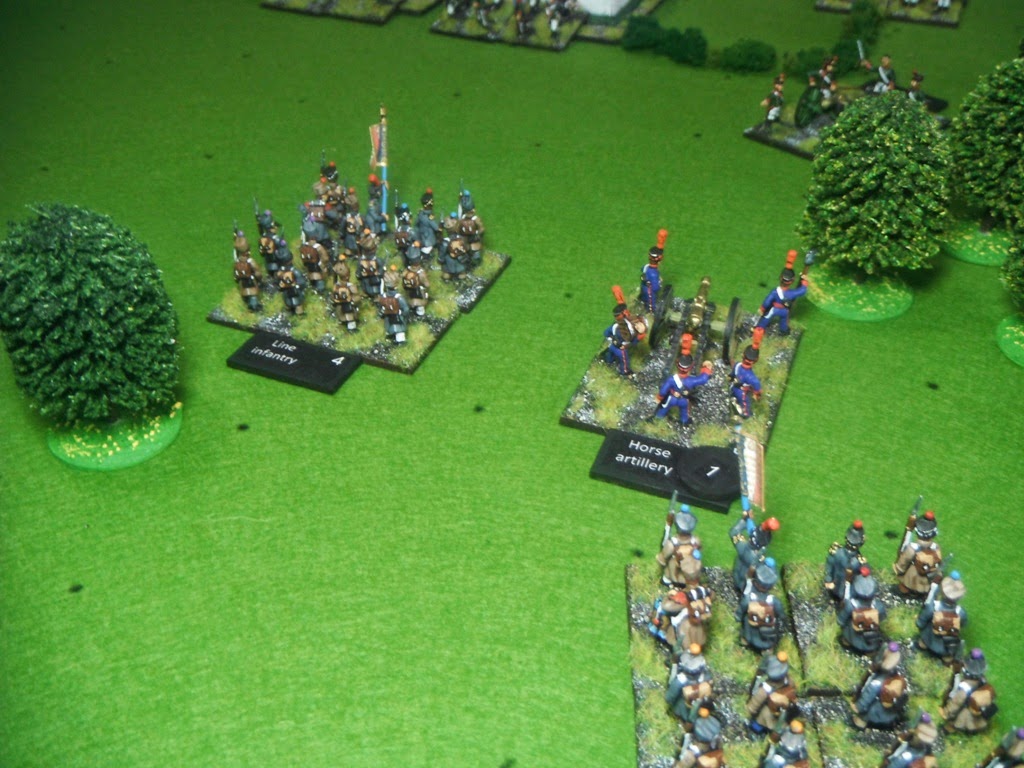 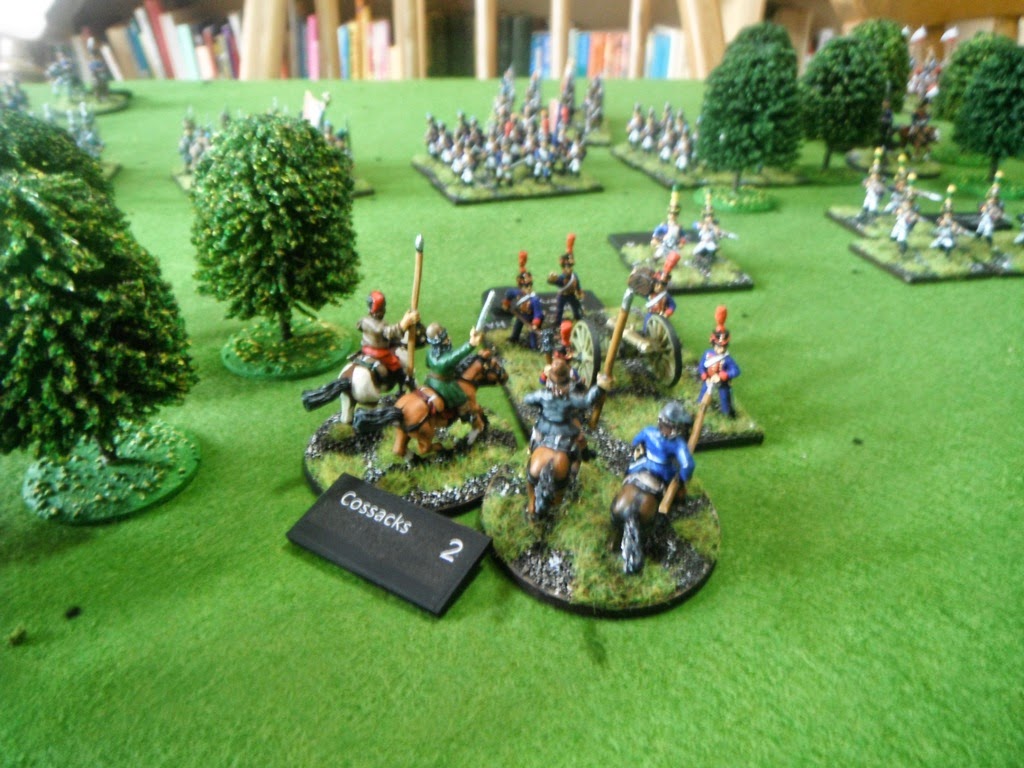