The arrival of another box of 20mm goodies for painting from Old John is always an exciting event as I just never quite know what's going to be inside! This time it's mostly more ACW stuff and includes many rare figures as well as some interesting pieces such as Brady's mobile photographic studio with horse and a timber observation/ signal tower. Pics show only the first layer that I unpacked! So many different manufacturers are represented including Qualiticast,  kennnington, Hinton Hunt, RSM, Rose, Musket Miniatures, Drebblerr and more. Looking through the lists I see the 79th New York Highlanders, which should be a real fun unit to paint. I consider myself lucky to have just a few regular customers who keep me going without any pressure, and John is happy to allow me to paint as I choose from the box without any time constraint, so it's a genuine pleasure to be able to add to his HUGE collection of wargame figures.

Essex 15mm's.
These continue to grow at a reasonable pace and this week I have added a few more bits including another unit of Voltigeurs (8) another unit of French line (16) another artillery base - this time French line horse artillery (5crew and gun), 4 Empress Dragoons and 4 more Russian Cuirassiers. I also decided to re base my command figures on 40mm circles (thanks again to Tony at ERM, I now have an official MDF mountain!). I consider this a good move as I'm well pleased with the results, especially the Napoleon figure with 4 Old Guard Grenadiers - just makes me smile to look at it.

By the end of next week both sides will consist of:

Enough for a reasonable game of Commands & Colors to begin with I think and I'm really looking forward to it. I think the focus then will be to boost the line infantry numbers and I now have some 15mm x 30mm 'half' bases so that I can produce '3 block' Russian units of just 12 figures as per the expansion rules. 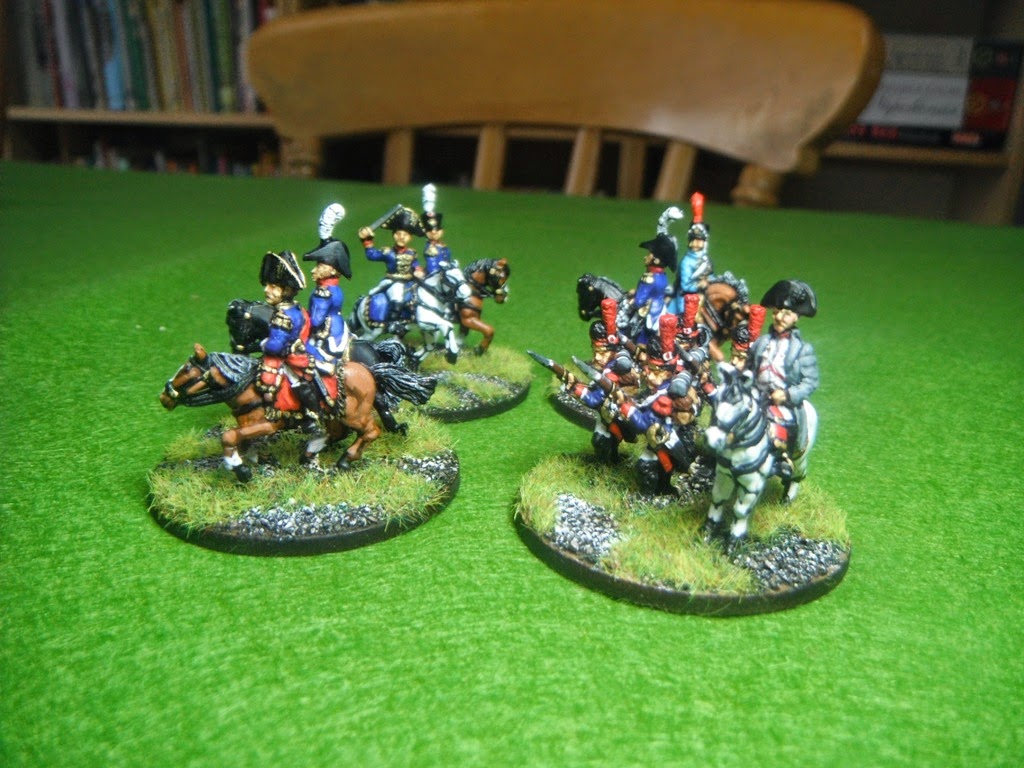 I intend to stick with Essex figures, for me it's kind of nostalgic journey as I said previously, remembering our family Saturday morning trips down to Canvey Island when the kids were younger, all of us including one large Golden Retriever squashed in the car, half hour in the Essex shop for me followed by a long walk in the country park and McDonalds on the way back home. I think we did this about once a month when the weather was good. Aside from that though the figures are very good and robust, ideal for handling.

Dymchurch 'Day of Syn' - Health and Safety madness!
This year it's our bi annual public event - the 'Day of Syn'. It's actually over three days of the August Bank Holiday and features lots of free entertainment (a rare thing these days) for visiting families culminating with a skirmish on the beach between Napoleonic re enactors and a band of historical local smugglers known as the Aldington gang. The re enactment has for many years (since 1964 infact) featured the fictional character of 'The Scarecrow' mounted upon a splendidly large horse, but Health & Safety concerns now means he is reduced to being on foot for these events, a very sad thing given the presence of horses on the beach on a regular basis. I mean lets face it, even if he took a tumble - and he is always a local volunteer rider - he was only ever going to land on soft sand. Funny old world.