Some thoughts on AWI Militia units.

In the small AWI battle I fought yesterday an entire flank of militia troops crumbled without the British regulars getting to grips, but rather firing steady non moving volleys (2 hex range - 5 combat dice for 4 block regulars when standing and firing - this is the Napoleonic C&C chart for line infantry with no changes). The dice were reasonably good, but it was not so much the losses that did for them, even though British musketry did thin the ranks, but the retreat flags that sent most of them flying to the rear. Also, my militia units only take 3 hits before they are lost so between the hits and the retreats the entire flank was swept away! When they did return fire (before heading off) it was largely ineffective, taking 2 redcoats who were recovered a couple of turns later on a 'Rally card'...... useful little card to hold.

Funny enough Tony had pretty much the same experience I think in his French v Spanish Napoleonic C&C game recently ( read here), so I don't think I have got things too wrong for my militia, they behaved pretty much as I would have expected, and in fact I pushed them forward hoping they would at least inflict some casualties before they broke. A lost militia unit under my adaption does not deliver a VP, rather like the Cossacks units in the Russian expansion.

First unit to go was surprisingly Hessian riflemen, caught between 2 units of continentals who moved up before firing, then followed up with a charge which routed them totally. All in all a fun solo game and I remain very happy with the overall look of things.


I do intend to make a new board, but I keep putting it off as I know it's going to be tough going marking out all those 55mm hexes. Occurred to me that I could even extend the size of the board by a few hexes each way for fighting bigger games...... I just wish there was an easier way to do it?

All below for the collection of 'Old John' - 20mm scale. 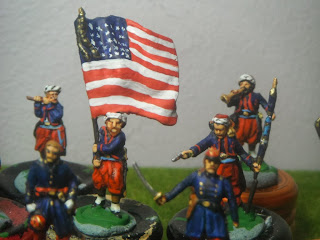 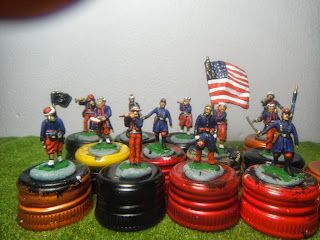 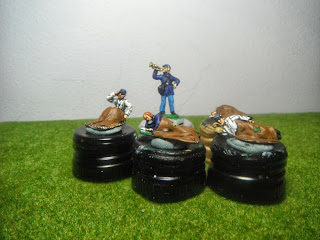