Completed these this morning for John's collection - 14 figures representing 14th Brooklyn Regiment. These are Qualiticast 20mm figures and very fine castings they are too. I have a fair number of Qualiticast ACW's to do for John, all superb figures.

The 14th were hotly engaged at Antietam during the fight for the cornfield, moving up in support of the 6th Wisconsin as described by Dawes of the 6th.

"The Fourteenth Brooklyn Regiment, red legged zouaves came into our line, closing the awful gaps. Now is the pinch. Men and officers of New York and Wisconsin are fused into a common mass in the frantic struggle to shoot fast. Everybody tears cartridges, loads passes guns or shoots. Men are falling in their places or running back into the corn. The soldier who is shooting is furious in his energy. The soldier who is shot looks a round for help with an imploring agony of death on his face. After a few rods of advance the line stopped and, by common impulse, fell back to the edge of the corn and lay down on the ground behind the rail fence" 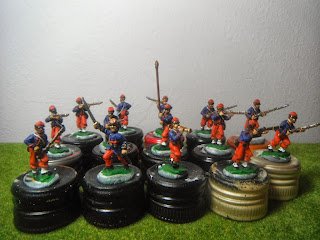 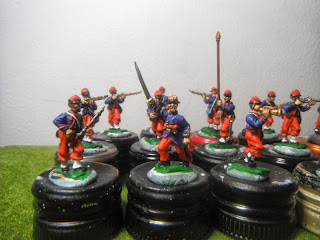 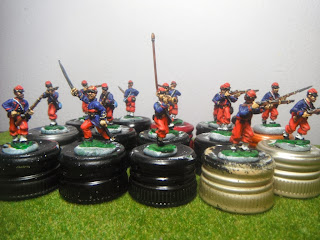