30th Anniversary and more on C&C for AWI.

It's been a busy few days, today is our 30th Wedding Anniversary and on Saturday night we had a lively party from which I am just about now fully recovered! It was great to see so many old friends, many of whom had been there on the day, and had traveled down from London for the weekend or evening. We had a fantastic time and I think it did us both a power of good. My wife gifted me a bottle of The Glenlivet, which was duly offered around and enjoyed in fine company.

I was a little fragile yesterday, so spent much of the day reading around a few blogs. Over on Ross Mac's blog 'Battle Game of the Month' (link at right) I was fascinated to read recently of the remote game and it really got me thinking about the potential of this type of game. I also enjoyed his post featuring the 'Battle Cry' ACW game, which he played on the board with miniatures (as I do now), and what struck me was how well a few trees etc improved the look of the thing. I decided to try a couple of things out. One slight issue I find when playing on the C&C board is how easy it is to miss a blocked line of sight, especially where the hill tiles are concerned and I have 4 figures placed on top of it and I have been trying to figure a way to raise the hills without too much effort. What I did was to stick together 6 of the 55mm mdf hexes ordered from Tony at ERM and Bingo! with a game tile placed on top it transformed the overall look as I hope you will agree (see pics below). So far 60 hexes have been used to create 10 hills which are now 13mm high and looks just about right for the 15mm figures. Next I placed a couple of old home made trees on the 'wood' tiles and again I think it really works well - if they get in the way I can just move them around. Possibly they are slightly too tall so I may reduce the size slightly and replace those ugly thick bases. I don't want to go too far with this, but I think overall things are looking good and it's mostly practical.

I'm fairly happy with the troop charts now so another test game is on the cards this week. One recent addition is to allow elite units to absorb the first hit and so in order to keep track I place a casualty marker with the unit which is removed together with a figure on the second hit. I'm considering extending this to light troops in open order ( bearing in mind that many British lights fought in line as elite shock troops including the Guard light companies ).

Remote games.
Ross has really got me thinking about this now! It could be perfect for my small board as I could give the remote player a pretty close view of his troops, just as if he was sitting opposite to me. The fast nature of the C&C games would mean a reasonable battle could be fought to a conclusion in less than 2 hours. I think there may be a way around the command card issue too, possibly by each player using his own deck. I note that Richord Borg, who is currently play testing the 'Tricorne' version of C&C has introduced this idea and I'm keen to know how it works. Not given it a lot of thought as yet but I do have 2 decks of C&C cards so I may play test it, any thoughts on how this could work? I think that a remote player able to draw and flash his own card hand would much improve the fun from that point of view.

Finally for now heres a few shots of the raised up hills etc, what do you think? 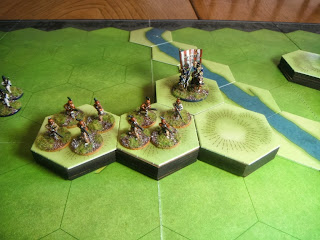 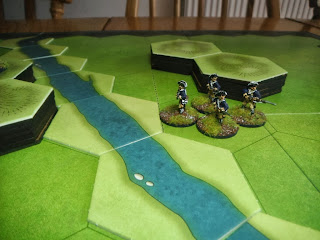 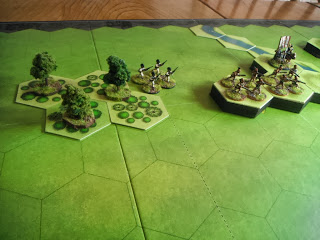 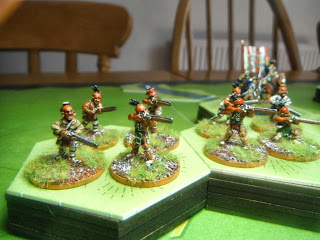 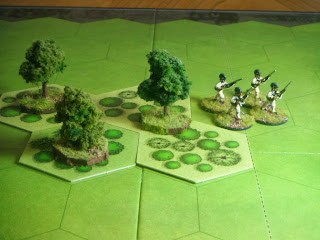