Having just completed a vast number of 6mm Heroics and Ros Austrians for a regular customer, which included no less than 20 guns plus crew strips, 10 x 6 horse teams and limbers, cuirassiers, dragoons and hussars, baggage wagons with teams of mules and oxen, and piles of Hungarian infantry in blue trousers to match the previously delivered Austrians in helmets (I even managed to get the fine black stripe along the centre of the yellow crest of the tiny helmets), it's nice to be back painting more 20mm ACW's from Old John's lead pile.

Picking up where I left off a while ago todays output is this lovely set of Confederate prisoners and a field hospital scene. The figures are packed full of character and three of the prisoner models are clearly taken from the famous photo of the three Confederates captured at Gettysburg. It is a very powerful and evocative image from the Civil War that has long stuck in my mind since I first saw it over 25 years ago. I hope I did them justice. For the hospital set I decided to paint the wounded Zouave as a member of the early war Louisiana Tigers. The Nun is a fine figure and the casting has captured well a feminine face.

For my own AWI project I've painted up a few officer figures that I plan to mix in with the figures. I have also ordered lot's of 55mm hexes from Tony at ERM as I have plans for them once I get the basic gameboard made up. On advice, I now plan to hand paint the hexes on the board, taking my time to ensure accuracy. More on this as things progress.

Few pics as usual, again I'm sure John will clarify the maker of the figures, they are a very good match for plastic ACW's in scale and proportion. 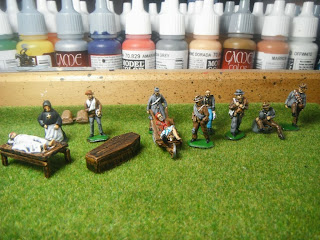 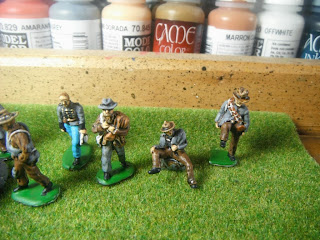 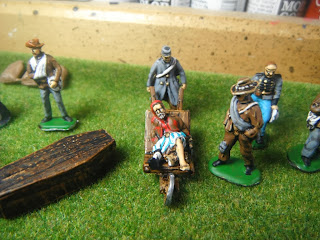 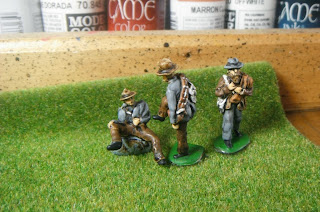 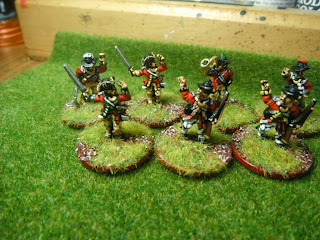