More thoughts on C&C for the American Revolution.

I am grateful to 'greenknight' over at TMP for sharing his ideas for using the C&C system for AWI. Chris is doing much the same thing as I plan to do, albeit using 40mm figures. He has now sent me his adapted playsheet and I am incorporating it into my version. Chris actually started from the 'Battle Cry' ACW version (which I do have), and I like what he has done. To give you some idea of how he has injected period feel into the basic system I'll list just a few of his ideas here.

Firstly, he suggests a neat idea for using the command cards, dealing the basic hand of 5 to 6 cards and then an additional 6 cards per player. Each player then hands back 3 cards of his choice, leaving the basic hand plus 3 cards. During the game each side may play a single card OR two maneuver cards. Where a player does decide to play 2 cards he may only pick up one replacement. This puts some control back into the players hands and will allow increased maneuver of the troops.

Movement and fire rates are increased as follows: All formed infantry may now move 2 hexes and melee, or 1 hex and fire. Ranges are increased in line with Battle Cry, so most infantry now have a range of 3 hexes, with 4 for rifles.

Militia always roll a damage dice when contacted by regular non- militia troops and react accordingly. Veteran militia only need to make this test once, ignoring after that. Militia will retreat 2 hexes per flag, supports and generals may cancel this out as usual.

Chris also differentiates between troops in close order and loose order and light infantry are allowed to pass through friendly units. British lights are also allowed the option to move 1 hex and melee, counting as close order. I think this reflects well the period tactic.

I am also personally keen to introduce a 'low ammo' rule into this game, and to this end have produced a few experimental markers. I'd like to find something other than the 'short supply' card as a means of representing this, as the 'Hand of God' approach irritates me!

Thanks to Chris for sharing his ideas and the play-sheet and for his permission to post about it here.

I have started to paint up some of the planned 'Victory banner' stands for both sides as mentioned previously. I used printed flags for these as I wanted to distress them a bit for effect. I'll do 6 per side plus a couple of Hessian bases. So much nicer to play for than a card token don't you think? and should add a bit of colour to the overall game. Also added more Continental Dragoons and a couple of light 'battalion' guns. On order now are Hessian units and command, plus the newly released '17th light Dragoons' and various other odd packs. It's all coming together well now.

More to follow, all figures are of course 15mm from 'Peter Pig' (link). 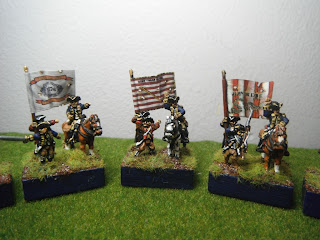 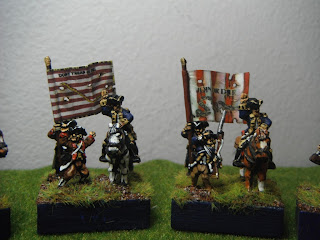 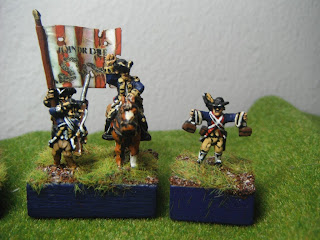 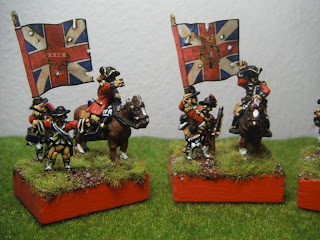 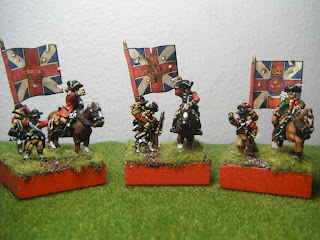 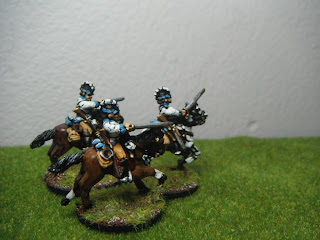