I can confidently now say that I have achieved the 'first phase' of my project, with the rebasing of the figures to sit in the 55mm hexes of the Command & Colours game board. I can now set up a game quickly and easily any time I feel that I want to play. It's taken much experimentation to reach this stage, from dotting out hex grids on Citadel Battlemats, to attempting some kind of texturing on the grid and finally to playing on the actual game board itself. Along the way I have created quite a bit of scenery and terrain items that now sit upon the shelf unused, and my thoughts have been slowly turning back to the possibility of building some proper scenic boards again. This would most likely mean finding a second set of rules that play on a conventional non hex table. Trouble is that I still find the C&C system such a pleasure to use and having tried so many sets in the past it is clearly going to be a challenge to find any other set that gives me such a playable game, so what to do? I have jotted down a few notes/rough ideas etc that I am considering.

This weekend I'm going to set up and play another experimental non hex C&C game in order to test a few more theories. It will be a small affair using larger units (3 to 5 'blocks' as required) on a simple terrain board with just 3 small hills (non hex), a village, woods and a river. I'll be using my trusty old DU stick which is marked out in 80mm sections. As previously each DU represents a hex, so for example line infantry move 1 DU, lights 2 DU's or 1 and battle, musket range is 2 DU's, rifles 3 DU's etc. When units move within 1 DU of each other they melee etc, and flags cause retreats of 1 to 3 DU's back towards the players own table edge etc. Units and leaders count as support when within 1 DU etc. By keeping in mind that 80mm DU as a sort of virtual grid the game plays pretty well as I hope to demonstrate to myself this weekend.

Why would I bother some might well ask, why not just play C&C on the game board or the old hex table? The answer is probably that I'm now so familiar with the mechanics of the game, which I think are simply excellent, that I want to stick with them if I can. I also want to be able to play using much larger units, as I feel this is the whole point of 6mm armies, and a solid block of 80 infantry figures (4 of my battalion bases) looks so much more convincing as representing higher formations. I placed a '4 block' unit of French light cavalry on a non hex hill for a quick photo, 56 figures, and as you can see it's pretty impressive!

Meantime I'm still happy playing out quick set up solo games on the supplied board, which I love, and have no intention of giving this up, but there is no doubting the visual impact of the larger formations.

I'll report back on the experimental game after the weekend, I intend to run through all of the features of conventional C&C including squares, combined arms, leader casualty checks, retreats etc to see how they work.

Beyond this I plan to update both the gallery page and the 'guide' page with the new basing style using the Baccus kit, which I feel is a big improvement, and a new painting guide reflecting my latest methods which includes improved face painting technique for these tiny figures, the detail is there to be picked out and a simple flesh 'blob' is no longer adequate! I'll also discuss brushes and illustrate my method for 'steadying' tiny fine strokes and some ideas on how best to work with paint that skins over fast such as whites and blacks, some of which hopefully might prove useful to other 6mm painters. 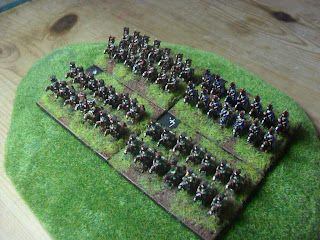