In order to keep some focus on my Napoleonic collection as it continues to grow, I have been making notes and working out what I will need in order to fight the Commands & Colors Waterloo scenario using a single base of figures to represent each 'block'. This idea is actually not as mad as it might at first seem! I have been giving a lot of thought to the hex size required as a starting point, and have arrived at the conclusion after playing around with various size hex templates that I only need to increase my grid by 50% in order for this to be workable. Currently my hexes are 95mm face to face. 'Point to point' this makes them 110mm. Thus a new hex size of 190mm x 165mm will comfortable accommodate a typical 4 block C&C formation. So the standard 9 x 13 C&C game board will just about fit a 6 x 4 table. There are just 2 formations, both on the British/Allied side that are represented by 5 blocks, these pose only a slight problem which will be solved by adding the 5th block as 2x 60x30mm bases, a standard base sliced in half so to speak so they still fit into the larger hex grid. All other formations are of either 3 or 4 blocks.

The next stage having established hex grid/table size is to look at the troops formation themselves in order to decide what is required for the game. I have already worked out overall numbers and in terms of figures it looks quite impressive, which should achieve the sort of visual impact I will be looking for.

Given that I have painted over 1200 figures in a relatively short space of time already I would see the above as being perfectly achievable. If I dedicate myself to a modest target of just 3 bases per week, I could complete this by next summer. Of the 100 infantry bases that will be required for example I already have around 28 usable bases, that's excluding the Portuguese bases which are not usable in this game of course, but including all of the 'Peninsular' British infantry bases, which in this scale would be OK I think. All future bases painted will be for use in this project, so that of course means British in correct 'Belgic' shako. Of the 21 cavalry bases required I already have 10 usable bases completed and that excludes my Light and heavy dragoons who will need to be replaced with correct headgear bases.

I am now working out where on the C&C map the various allied formations are represented, KGL, Dutch Belgians, Brunswick, Nassau could all be represented by bases once I have established how best to break these numbers down. More to follow in due course.

Meantime here are the Royal Horse Guards of the Household Cavalry, just completed. The 1st Kings Dragoon Guards will complete this 3 block formation, the Life Guards being already completed. 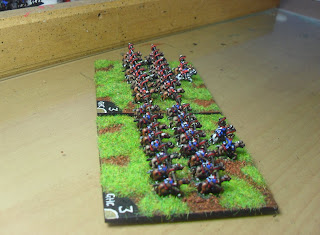 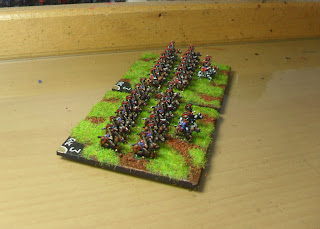 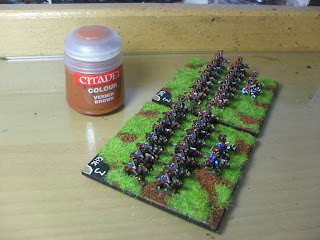