I found myself with time on Saturday morning to play through 8 full turns of DBN. This was my first time playing the rules so I took things slowly to try not to miss anything. rather than do a full in depth write up I want to record some of my initial impressions on how the game plays.

Overall I found the game to be slightly slow to develop, the French rolled to attack but consistent low rolls for Command Action Points meant the British were able to get into a better position and took the fight to the enemy.  Movement rates are modest, 200 paces for infantry in good going, but it's possible to use additional CAP's to double up the pace and on roads the 200 paces is also doubled, useful for moving up columns fast. Attackers get an additional 2 CAP's on the first turn, but with the French rolling a 2 it did not help much especially as the British rolled a 6 in the same turn. On the whole though I liked the movement and activation system

It took a few turns to get anything within shooting range, ranges are short, (200 paces for muskets which equates to 3" on my measuring stick), and it took time to get artillery into a firing position and within range. I found artillery fire to be fairly ineffectual against infantry which was frustrating. When it came to infantry exchanging volleys I found the shooting process to be straightforward, establishing the basic factor and then adding or subtracting tactical factors to give a score that was then added to by a dice roll. The results can be a hit, two hits are shaken and 3 hits destroyed. A unit can be destroyed if you double your opponents score, only a single dice per side is used throughout this game. Shaken units require an additional CAP's to activate and get a minus 1 when firing or in hand combat which works well.

Close combat is resolved in much the same way but with the ability to force a losing unit to recoil  a base depth. I found the process a bit 'fiddly' fighting individual unit to unit combats, counting support from units to either side in base to base contact and it seemed to take time to resolve. I was unsure if a unit that has lent it's support to a friendly unit in combat can then fight it's own combat in a situation for example where you have two formations of say 4 units each in line and facing off together. I decided against this but may have got this wrong. What I could not find was any mention of infantry forming square when threatened by cavalry, it's possible I missed this somewhere. Edit: 11.14 Infantry v cavalry optional Response Test rule.

I overloaded the table (3x3') with terrain features which meant that it was difficult to get the British into any sort of defensive firing line with artillery support, this is something I must reconsider next time. I managed to deploy the 60th Rifles in a village, but not a single Frenchman came within their 400 paces range! I think the very short firing ranges are one thing that really bothered me, I would be very tempted to increase basic musketry range to 300 paces, and all other ranges accordingly. I think this would really open up the game and allow artillery a chance of becoming more effective, I will experiment with this in my next run through.

Conclusions.
I will definitely persevere with DBN. There are a couple of tweaks that I will make next game:

1. I'm going to increase the ground scale so that 2" represents 100 paces. This just means making a new measuring stick but easy enough to do. In essence the standard 200 paces move of infantry in good going will be 4" and on roads 8". As I'm using a bigger board anyway everything remains in proportion.

2.  I'm going to increase musketry range to 300 paces (6"). So the range of line infantry muskets becomes the same as the lights, same weapon after all. 'Jagers' (British Riflemen) have a range of 400 paces in the rules, so 8".

3. Reduce the amount of terrain items to open up the battlefield slightly and allow more room for formations to deploy. For example in the battle the fields were more of a hindrance than anything else, I could not get the light infantry and rifles to deploy in there as I wanted to. Removal of those fields alone would have improved the deployment of the British, much as I like them as features they are impractical in a game of DBN.

I think that the  increased movement and firing range will open up the action slightly and make things a little less 'fiddly', and by simplifying the terrain layout a more open battle can be fought.

Pictures below show  the 8 moves played in sequence. Frustratingly I don't seem to have taken photos of the final combat resolution! Both sides suffered losses and recoils, the British losing 1 unit and the French losing 2. At this point I had a few questions about the rules that I needed to read up on around close combat supports and order of resolving the combats where there is an extended line v line situation. Next run through I will do a French attack column v line and introduce some cavalry action, but it was an excellent and useful learning experience and introduction to the practical playing of DBN rules.


Deployment. The French infantry are in march columns and are the designated attackers. 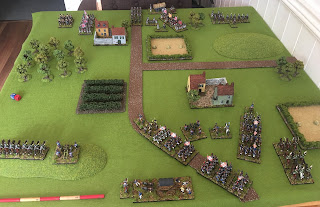 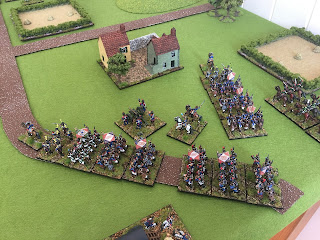 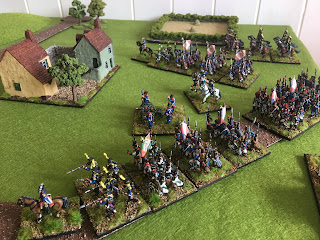 Turn 2 (Below) Both armies advance. 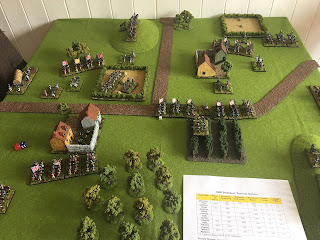 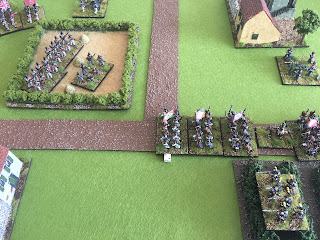 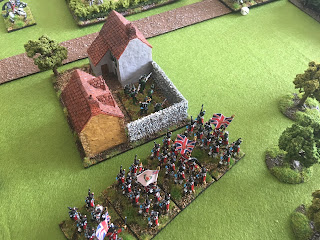 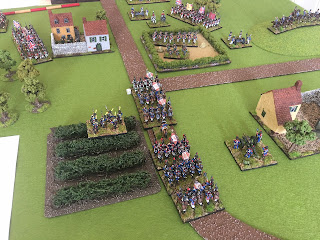 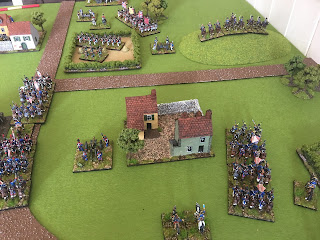 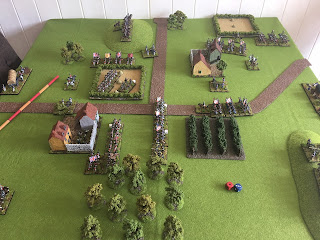 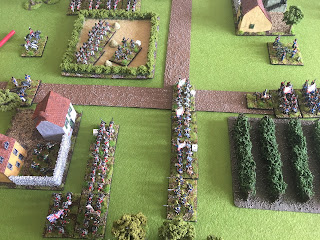 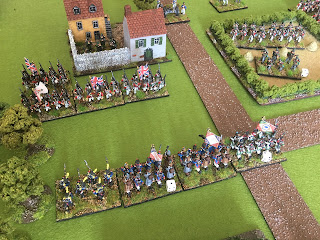 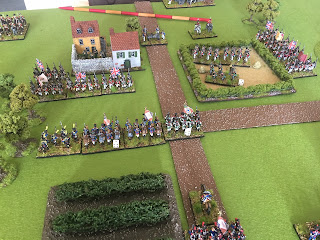 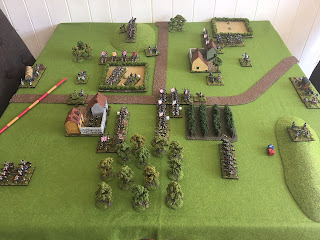 Turn 7 (Below) Melee ensues as the French attack. 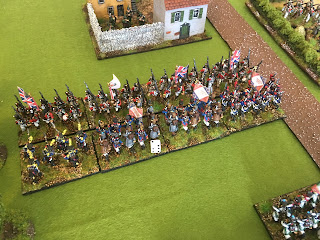 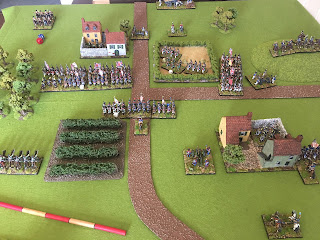 Below: Enthusiastic Ney (AB) confers with a BM Marshall, a good match.  I do plan a couple of circular multi figure command bases. 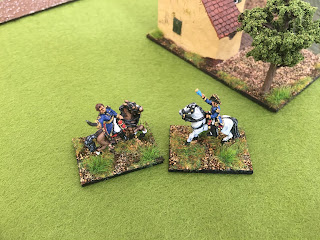