Stocking up a bit!

The days certainly seem to be flying by at the moment and I find myself spending several hours each day at the painting table. I'm itching to get outside for a long walk in the woods with the dog, but at the moment it's a quick twenty minutes in the mornings trying to avoid others until my cough and cold subsides which it slowly is.

I was thinking that with the possibility of this current crisis going on for several months ahead I had better stock up with more soldiers to paint. I have always tried to avoid lead mountains as I prefer to buy just as and when I need, but I want to know that I have figures for at least several weeks ahead now. So, with Baccus orders placed I decided to get my order in for the 40mm Sash & Sabre Polish Guard Lancers that Andy has been kindly holding for me. I have had this unit in mind for months now and think they will be a colourful addition to collection.


I have also decided that it's the right time to finally start painting some 40mm Spanish infantry and to this end I have placed an order with Perry Miniatures for the first 24 figure unit. Magnificent castings of course, they are wearing the 1805 white uniform and come with a choice of 4 heads. Also planned down the line is a converged battalion of French line Grenadiers wearing bearskins, these will be from Sash & sabre.

Meantime I'm keeping busy painting units for my 6mm War of The Spanish Succession project and figures of the same period for John. Those shown below are the last of this batch, wonderful crisp 20mm castings by German maker Hagen, I just had to grab a photo to show the excellent fine detail on these figures, I'm really looking forward to painting them. I'm not sure about current availability of these figures but I'm John will fill us in on that. 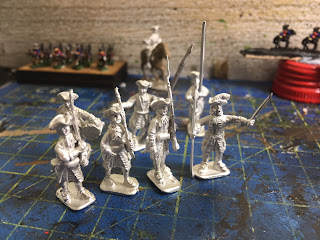 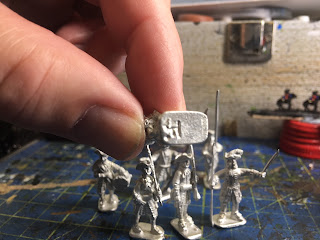 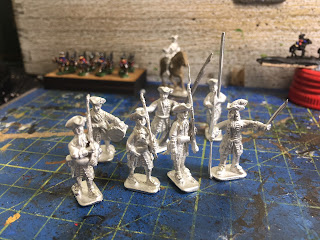 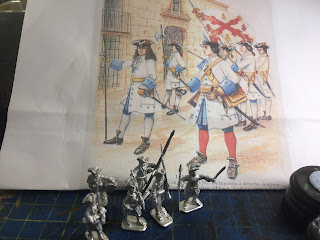