Another busy week painting and modelling.

The 6mm WSS project has temporarily stalled due to Baccus being 'swamped' with orders, not a bad situation for any small business really, but as customers we need to be patient. It's like the old days of 'Please allow 28 days for delivery'.

So my attention has turned to other ongoing projects this last week, some more painting for Old John, a couple of new buildings for my Bolt Action set up and a decision to go ahead and complete my 40mm RHA battery, pushing aside the planned rocket base for the time being at least.

For John we have some lovely 20mm Polish Dragoons, a couple of Spanish Death Hussars and a Mounted General. I must say I really liked the horses with outstretched legs that three of the dragoons are mounted, not seen these before but they have real character and well defined muscle tone which helps highlighting. I'm pleased with how these all turned out. Next up will be 6 Spanish (Portuguese?) cavalry wearing yellow coats with blue facings which should be quite striking. John provides me with printed reference sheets for each type so I can see how they should look. 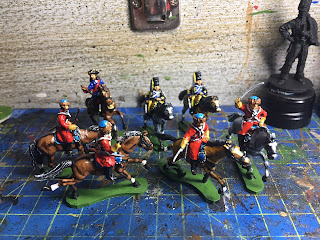 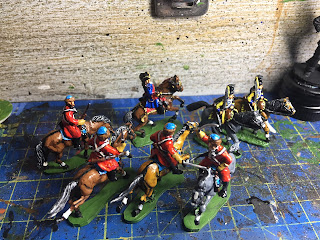 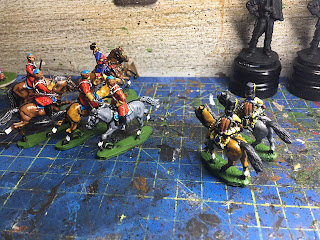 I recently spotted these buildings on ebay, and as they looked so much better - and more in scale - with my 28mm Bolt Action collection I ordered a couple. They are very reasonably priced at £10.00 each and come pre painted, in addition they feature a more 3D finish compared to the others I bought some time back for £9.00 each, so these represent much better value in my opinion. I like them so much that I now have the bakers shop on order to match. The previous buildings will be confined to storage now. 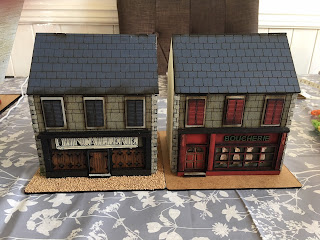 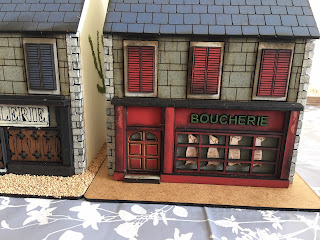 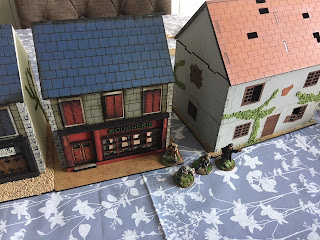 They also scale much better with the new trees I bought from Simon at S&A Scenics recently. These are Simon's 'More realistic' trees, not cheap but beautifully hand made to order and a big improvement on those I used to own. I have a dozen of them so far. 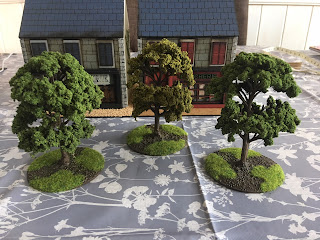 On the subject of Bolt Action - and as I had the tray out to show scale of the new buildings - here are a couple of pics of the German reinforced platoon, they are I must admit an SS platoon (wearing cammo smocks), I do still feel slightly uncomfortable about that but then remind myself that it's only a game. The US infantry platoon is slightly larger with 4 x 10 man squads, 2 x medium machine guns, medium mortar, artillery piece, half track and a couple of M4 Shermans. I doubt that I will add much to these basic forces. 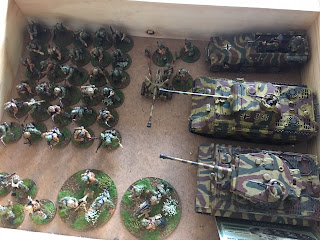 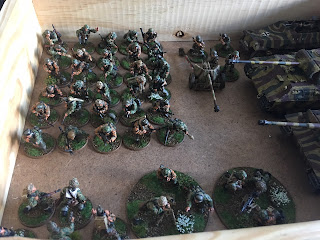 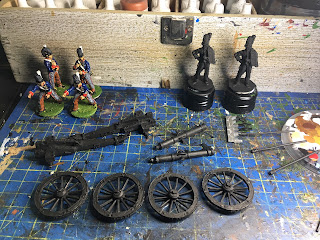 The Goblins and Elves for James' 'Joshua' charity project have now been posted off, so hopefully Baccus will come through with my order in the near future. Meantime John will keep me painting!
Posted by 'Lee. at 06:54