It's been an interesting week on the hobby front, mostly spent buggering around trying to paint tartan whilst waiting and hoping for the arrival of the Perry Miniatures - it's now day 23 since posting. I'm checking the dreaded Buzon ( postal booth where all post to the Urbanisation is delivered) on a daily basis for the card left under a lump of rock, but to no avail. A visit to the Correos in Ador to enquire after the package resulted in an encounter with an elderly Transgender chap from Sunderland in the bar opposite with whom we had an interesting chat, much to the amusement of the four Spanish workmen enjoying their usual lunch time beer (or three) on the next table.

I have painted 7 x 42nd Highlanders this week and on the whole the Black Watch tartan 'impression' that I have achieved would seem to be about as good as I'm likely to get now, for some reason I really struggle to paint tartan despite some useful tips from Rob and others. It's a kilt, its very dark with a slight highlight and that's the best I can do for now. Next step is to convert the extra 12 figure base of Highlanders from 92nd foot to 42nd, this will involve repainting the facings and kilts to bring the total to 19 figures and the Sash & sabre command pack will need to be ordered to bring them up to the full 24 figures. This will then give me a total of 6 x 24 figure British line infantry battalions including the 92nd and 42nd foot. In addition there will be 12 x 60th rifles on 2 bases and 14 x 43rd Light Infantry in skirmish order on 2 bases  .....subject to the Spanish postal service delivering the latter eventually of course!


RHA crew - progress.
I mentioned a couple of posts back that myself and Ian Smith were planning to get some Royal Horse Artillery crews sculpted in 40mm to add to our Peninsular War collections. Whilst my initial idea was to commission the masters the traditional way, Ian persuaded me to explore the possibility of digital sculpts that could be 3d printed to create resin masters, indeed the 3d prints themselves could be painted and used for our artillery crews. A test digital sculpt of the RHA officer was commissioned by Ian and After a couple of small changes the latest images of the figure looks quite amazing. There are still a couple more alterations required, removal of the cross belt being one, and enlargement of the sword hilt another. Still early stages but I think the potential to produce some unique gun crews here is quite evidently a reality. I welcome any comments or suggestions at this stage.......it's a sneak preview. 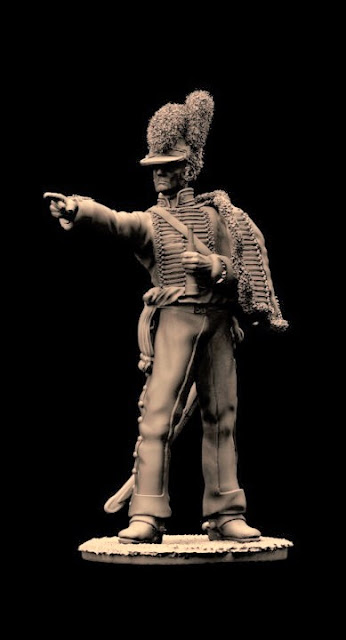 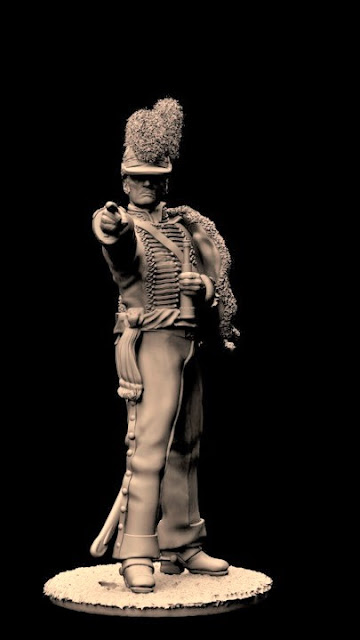 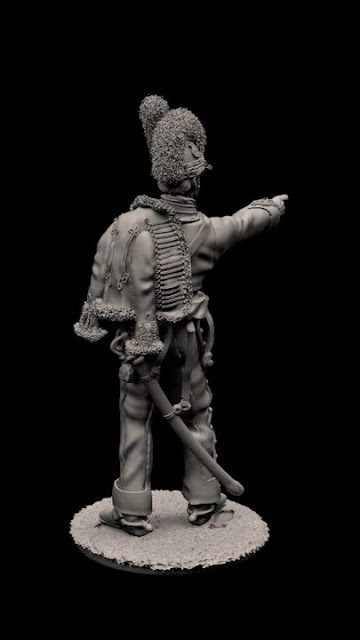