Here are the 92nd and 42nd Foot together to illustrate the different tartan impressions. The 92nd look a bit darker in reality, the satin varnish I think is responsible for this, but I'm happy now when I step back a foot and look at them together. The Sash & Sabre Highland command pack comprises 2 standard bearers, officer, piper and sergeant to fill the remaining gaps, three of them wearing trews.

I'm a bit stuck now as the Perry's have still not arrived after 25 days and my wife returned to the UK for a week yesterday and I had planned to get a lot of painting done. I'll give it a few more days to see if they turn up before contacting Perry miniatures to see what can be done.

Shaz carried the French 1/72nd battalion that I painted for Tony back to the Uk in her handbag as I thought it would be safer and quicker if they were posted to him from there. They were  individually wrapped, each with a short piece of plastic straw protecting the fragile Les Higgins bayonets. I decided to attach a printed picture of one of Tonys units to the outside to illustrate what was inside before they went through the scanner and this caused quite a stir among the customs guys at Valencia airport. I don't think they had seen model soldiers before because at one point three of them were looking at the picture, all smiling, one of them said as the package was handed back "No bang bang on the plane" which made everybody laugh..... Shaz was suitably embarrassed, but all in a good cause.

No Bank Holiday here in Spain on Monday (they have far too many anyway), so I'll be down checking that buzon again tomorrow! 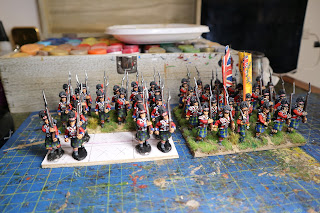 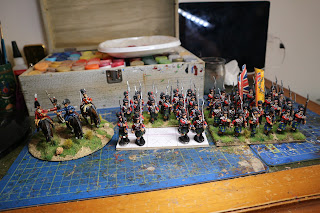 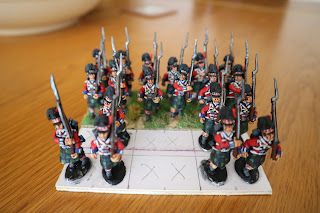