I mentioned previously that my Daughters had made a gift of 10 Perry Miniature 40mm 's from the Peninsular range as a thank you for helping out with car loans last year (like you do). Well, it's now almost three weeks since they were posted and still have not arrived. I contacted Perry and asked for a rough time scale to Spain and received a reply within a couple of hours telling me that it can be unpredictable, up to 15 working days. They said to contact them again if it has not arrived by end of next week. So, I went back to my Sash & Sabre leftovers box to see if there was anything to fill the gap with and found another 8 Highlanders. Some of these had broken bayonets, but a bit of filing to create a clean surface and a touch of my newly discovered Superglue that actually sticks  things (thanks to 'Auntie Wainwright' at Merca China in Villalonga), and they were surprisingly solid once dry.

I already have the 92nd Highlanders 24 figures, plus an extra base of 12. I would only need to paint 7 figures from the box, repaint the facings and kilts on the other 12 and then would only need add a Sash & Sabre Highland Command pack (2 standard bearers, officer, bagpiper and Sergeant) in order to create another 24 figure battalion, and the obvious choice was the 42nd Foot.

The first slight problem with painting the 42nd is that the lace is looped and not square at the ends as represented on the castings, but this is something I hope be able to get round with a simple paint job. The kilt of course is the very dark Government Sett which should be an enjoyable challenge. There is  endless reference material to be found on this regiment, so with the above in mind I have started on the first 4 of the figures. 'WIP' shots are very popular over on the Facebook Napoleonic Group so I thought I would post a couple of pics of the chaps at this early stage. I always paint the straps, lace etc in mid grey before building up the white, this helps to create some shading/shadow. The flesh is painted light brown, fairly dry, then given a wash of red ink before highlighting with flat flesh. A little more white/flesh will be applied to the nose. I find with 40mm I can use a size 0 brush even for quite detailed work (Rowney/Daler sable) as it holds a very good point. Next up today will be the white and then the kilt patterns.

I will check the dreaded Buzon (postal booth) on the way out later to see if there is a Correos card left under a lump of rock to say that my package is awaiting collection........ I won't hold my breath though!

Edit:  Bugger it, nothing again today so it's hopefully going to be next week. 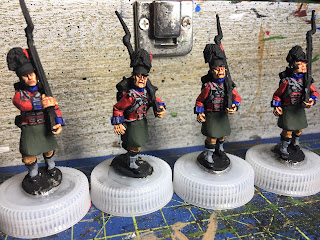 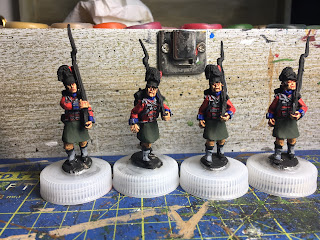