My blog seems to be settling back into a regular Friday update again, I find this helps with motivation as I can see week by week how the armies are growing and what I'm achieving. I have written a longish post on how I plan to use my troops on the tabletop as I'm close to that stage now, but I think I'll hold that over as a Sunday 'extra' and meantime record whats been done this week and what's on the agenda for next week.

This morning is a lovely one here in Spain, the temps are set to be in the high twenties again so we are off to explore Gandia beach today and find a nice seafood restaurant to have lunch. The drive through the orange groves is always a pleasure, but more so now that the trees are heavy with fruit that is slowly beginning to ripen and we are looking forward to experiencing the time when the air becomes rich with the aroma of the oranges.

This week has been mostly spent getting the basing texture on the French infantry and touching up the numerous figures that were described as 'blocked in' by Andy, in fact they were not far off being finished and I have been highlighting coats, brightening belts and bringing out the faces etc. I'm in the process of organising them into 12 figure companies as you can see below, still need to repaint some pom poms to match, but they are nearly there. Apart from this I also painted two more British mounted officers, one being the colonel of the 92nd Highlanders, I could not resist replacing a bicorne head with a highland bonnet! I hope that by the end of next week I will have all of the French command figures painted, some are already undercoated ready to start. 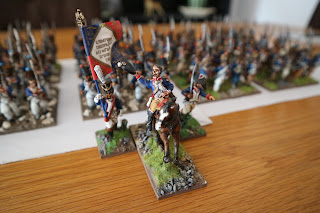 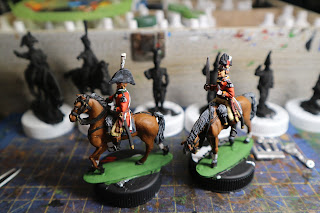 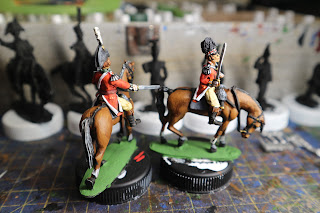 Aside from the above I'm pleased to say that my first order for Vallejo paints sent from the Uk (yes I know, it's a bit mad as they are made here in Spain), arrived in just 6 days via priority mail. This is the Napoleonic boxed set of 16 shades, I have 3 more on the way via Royal Mail international so that will take a few days longer, but for a total delivery of just £6.00 for the 3 sets I think that's very good service. The other 3 sets are the Equestrian shades, the Flesh tones and the 'Basics' set, all contain very useful colours with a few duplicates such as black and white but then I use a lot of those colours. It's good to know that I can still order my modelling supplies from the UK with no problem. 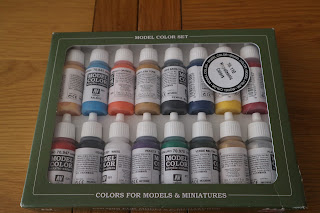