Firstly I'd like to thank those who commented on my last post, and especially to 'Norm' who took the time to write a detailed and informative comment that has really encouraged me to persevere with the DSLR camera.

This last week has seen much progress on the basing front, with only a few units to finish off. It has helped that I have decided upon the finish that I want to use, it's pretty simple, coloured filler mix applied by knife and textured, a few stones added here and there, 6mm static grass mix,  Vallejo Flat Earth over the bare areas and then a final highlight/drybrush with Buff. You can see it in the images below.

I have added two more mounted French officers this week, the chap with the bicorne being particularly pleasing to me. I don't normally blush up the cheeks but I did in these cases and I really like the impact it has on bringing out the faces. If it's old toy soldier style I don't mind one bit! I have a couple of French standard bearers and a drummer up next, after that I want to get stuck into a squadron of 8 British heavy dragoons with laced coats and bicornes.

40mm Sash & Sabre Peninsular Napoleonics - note only the mounted officers were painted by me, the infantry are part of the painted collection as purchased, I'm just basing them all up! 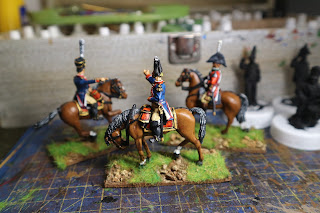 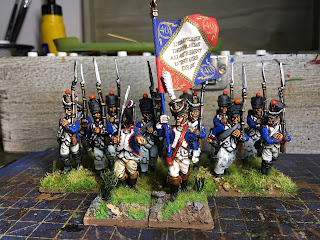 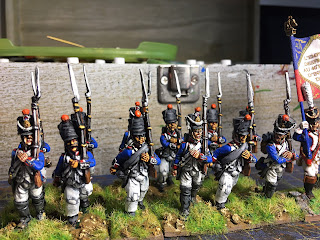 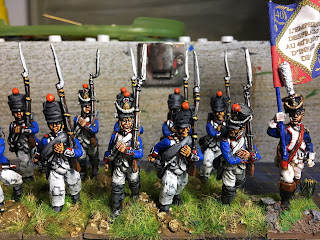 I am holding back on a post tentatively titled 'Thinking out loud' wherein I have tried to get some of the thoughts and ideas on how I plan to use these figures to game with out of my head and down on the blog. I hope to have it posted here by Sunday and hope it will prove thought provoking.

Finally for now, we were in 'Merca China' this week, one of those Chinese sells everything cheap kind of shops, actually buying decorated plant pots, and as usual I always keep an eye out for anything that might prove useful hobby related. Imagine my delight when I spotted large sheets of balsa wood, perfect for constructing scratch built Peninsular style buildings! Again this is something I have had in mind for some time but been searching for a base material. I plan to build 40mm scale houses but in slightly low relief and the balsa will form the basic shell of what I have in mind.
Posted by 'Lee. at 02:40