I'm close to finishing my 'phase 1' forces for Flames of War, the Germans are done and I'm slowly pulling the Allies together now, with just British infantry to be completed. So I decided to indulge myself in four objective markers ( FoW games are won by seizing objectives). I could not resist the crashed Typhoon base and the Ammo dump models but decided to knock up the other two from scratch. As you can see I went for a destroyed Sherman, nothing too gruesome, it's been penetrated by two AP shells through the front armour and the turret has lifted. We must assume it contains something that the Allies need to recover. I decided against open hatches and bodies.

The German base is just me having some fun with some Peter Pig characters. I know it's far too 'busy' but I could not resist showing the Germans with raised hands while the senior officer stands with folded arms as a Para commander gives orders. The truck is also a PP metal model with added fuel cans in the back.

Tanks don't look great in these pics but you get the idea, the green looks a bit flat, they look better in the flesh, more contrast. I'm still adding stowage, the sand bags you see are home made. I'll be working on all the bases with added foliage etc (cheers Jamie!), and have decals sorted to mark them all up. Aerials will also be added to command tanks.

I'm playing test games to get a feel for the rules, but I'm short on terrain for this scale so that's my next step. 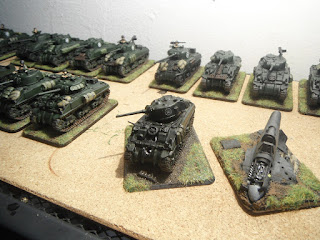 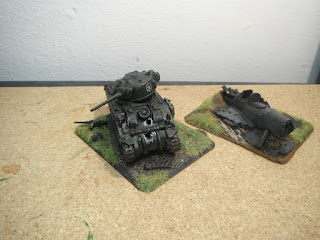 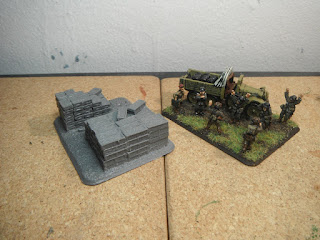 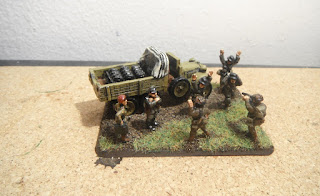