Given the recent downturn in enthusiasm for painting figures generally I'm now trying to get myself back to form again. The painting service has suffered badly recently but I do want to keep going once I have recovered from this dip. I have noticed that after 18 months of almost continuous daily painting my eyesight is now struggling with smaller scales and I can no longer paint 6mm as I used to. I intend now to stick with 15mm for myself and to focus only on 20mm figures for commission work. I consider myself lucky that my eyesight is as good as it is for my age (mid fifties) and I don't want to cause any more strain.

Zulu!
On a much more positive note I had a flash of inspiration the other day when it was mentioned that it was the 50th Anniversary of the release of the film Zulu. This is something I have had in the back of my mind for years - I still watch the film every year during the festive season when it is shown on TV and it never fails to move me. But what really made me think again was seeing the new 'Zulu variant' scenarios on the Battle Cry  website only a few days ago. I could hardly believe that somebody has produced a 'Commands & Colors' style game for this period. So I set to working out how I could do this as a 'side project' and how many figures/bases I would require. Here is the scenario for Rorkes Drift (linked via the BattleCry website):

Looks a fun scenario don't you agree? 13 x Zulu units of 5 blocks each and 10 x British of 4 blocks. To make this work visually I reckon 15 Zulus per unit (on 5 bases) and just 4 British infantry per unit based individually. This would give 195 Zulus facing 40 British and should look about right. I don't think it would take me long to paint all of those Zulus as I have a method in mind for them.

Here are the scenario notes, again from the BC.net site, I like the idea of the British having to survive 3 wave attacks to win.

Victory Conditions:
- British: At least 1 Unit (not LDR) must survive 3 attack waves of Zulus
- Zulus must destroy all British within 3 attack waves

- Cross sabers hits only in melee

- Remove the CallForReinforcement, Short Supply
and ConstructFieldworks card, they are not used in this scenario.

- Retreats: The British can choose, to retreat up or down.
The Zulus on the top half battlemap retreats to top, the Zulus
on the bottom half retreats to bottom.
Zulus on the middle hex row (row with the british marker)
can decide, in which direction they retreat.

- Zulu Attack Waves: The Zulus starts each attack wave with
full strength units (a killed Zulu LDR will not replaced),
in the same hexes like on the first setup.
If they loose 4 units (not LDR´s), the wave retreat immediately
and the next wave is setup.

- British Reorganisation: The British can reorganisate there units
within Rorke´s Drift to any hex, before the Zulu player start his
next attack wave.

- British Recovery: Before the Zulu player start his next attack wave,
each British unit with lost figures, which is on a Hospital hex
(or is moved during British Reorganisation to a Hospital hex),
can roll 4 dice to recover units. For each INF symbol is rolled,
this unit recover 1 figure.

Now it must be said that the Essex Zulus are excellent and I would have no hesitation in using them for this, I think it would make an excellent show game and it could be quickly put together. This is extremely tempting indeed!

Napoleonics.
I painted the additional cavalry 8 figures required to make the cuirassiers and carabiniers into two separate units and I need to do the same for the Dragoons (currently line and Empress together) this will make 8 units of French cavalry. Finally the Guard lancers need command adding and those forward thrusting lances moved to an upright position.

Note the altered head and sword positions on the below cavalry, just adds a bit more variation to the overall look I think. All 15mm Essex Miniatures of course. 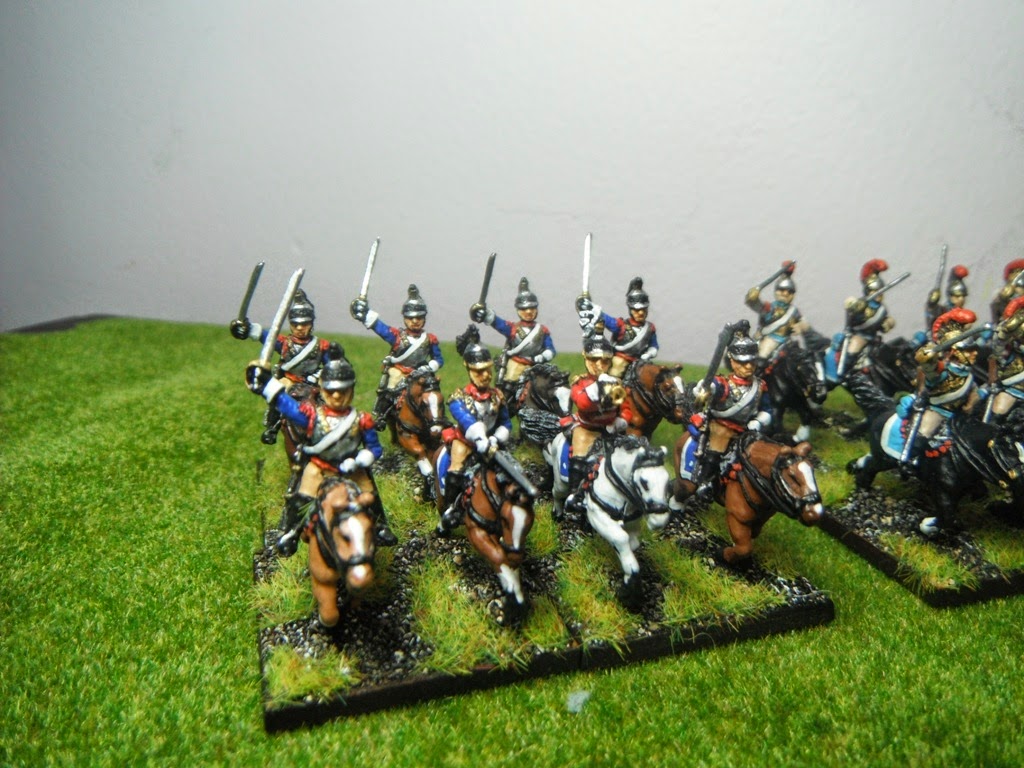 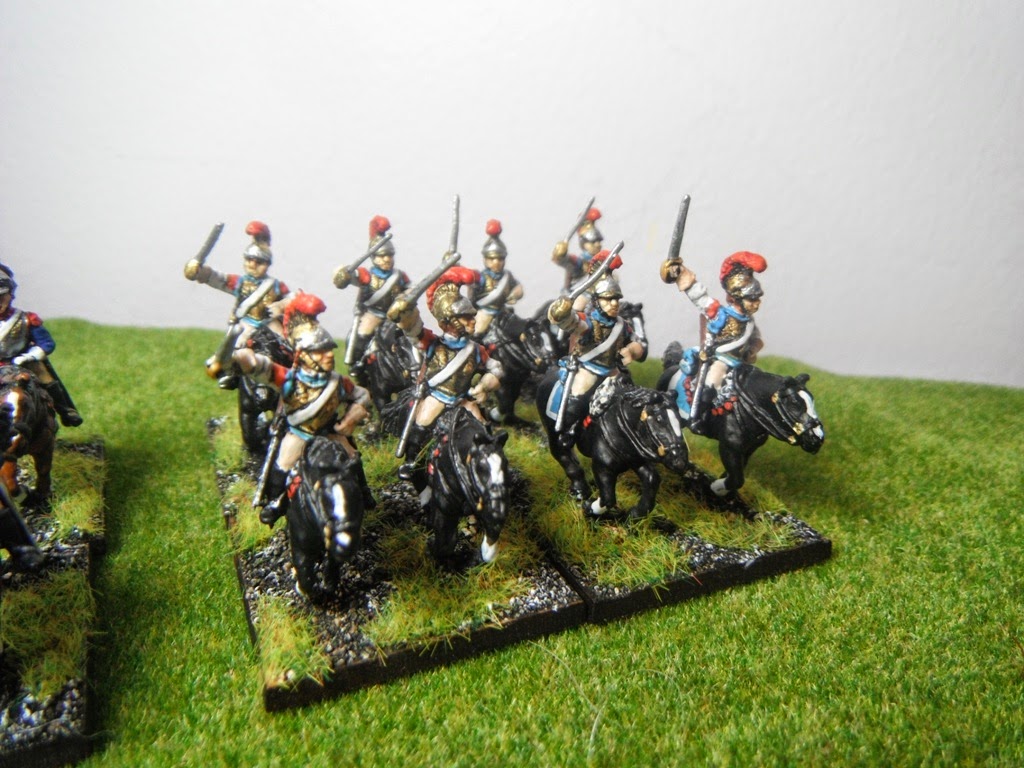 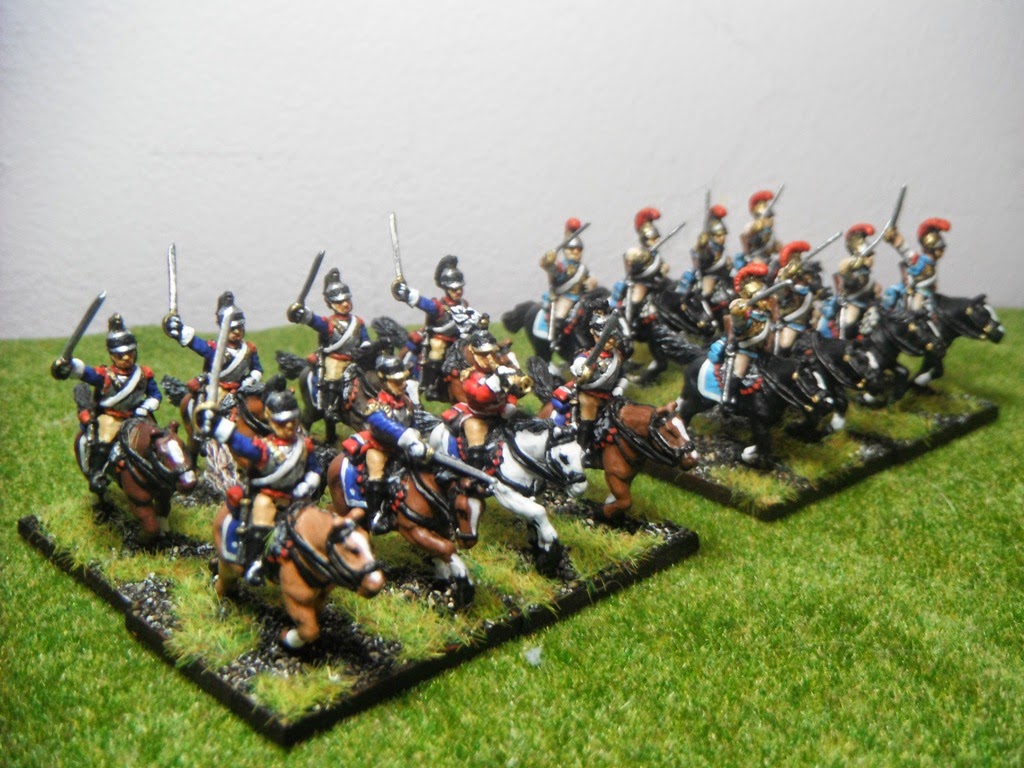 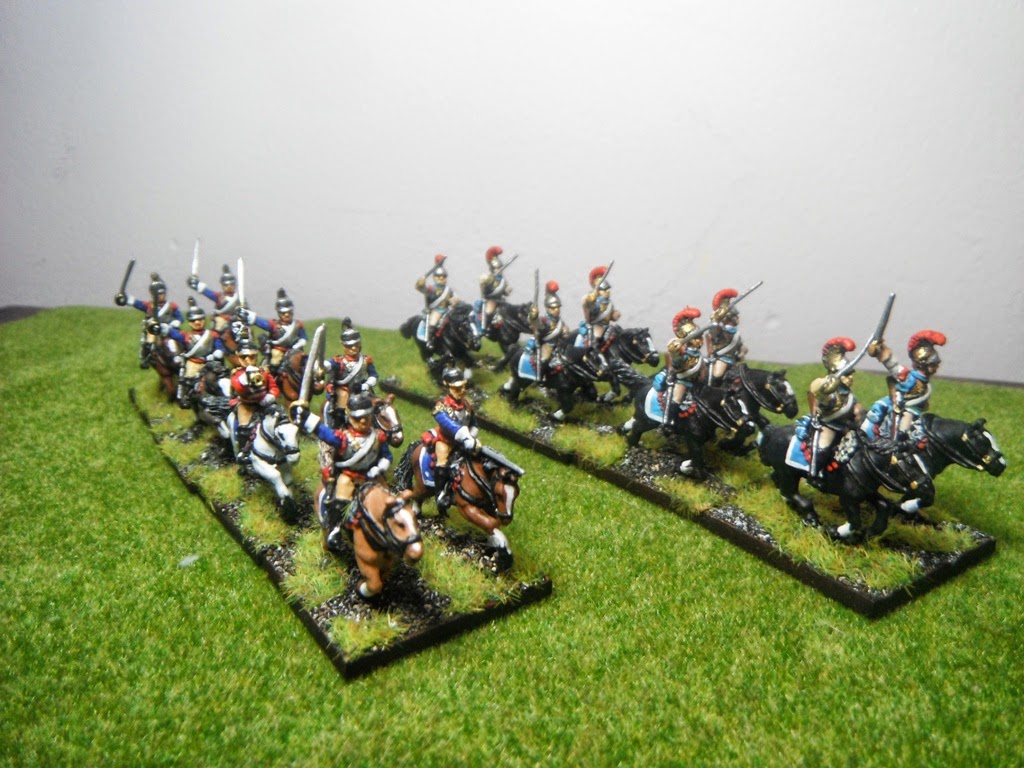