Progress and a little side project!

Not a bad weeks painting, 12 Hanoverian cavalry and 34 Turkish Janissaries all for Old John. Starting next on more of  JBM's gas mask wearing Prussians - even the Uhlan horses are wearing them! - and Denzil Holles Regiment of Foot for Graham. Then it's back to more for John, more Ottomans mostly before I get started on the follow up box.

I still have quite a number of AB Napoleonic 18mm figures left in the drawer so as a means of using them I have decided to paint up British, French and Portuguese armies for use on the Commands & Colors game board with 1 figure replacing each block. I have absolutely no intention of painting up full units, entirely pointless, but I still like the idea of a game of commands & Colors now and then and the figures are perfect for it being very robust. In order to enable single figure handling I'm going to use a couple of coats of gloss varnish to get a more toy soldier style. A few examples below, note the bare round bases with colour coded edges, again gloss varnished. Not going to rush this, just a background project over the next couple of months or so and who knows, if I'm happy with it I may even go on and do the Prussians. I have no interest any longer in laying out big tables with lots of scenery but I do fancy having some shiny soldiers to use straight on the game board with just the terrain tiles supplied.

EDIT: Once again useful to view the photos large, slight scratch on the right shoulder of one of the spearmen corrected, also tidied up the tops of the officers turbans. 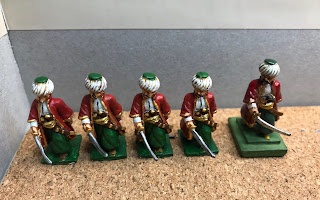 Above: John asked me to paint the 4 Turkish officers the same as the supplied gloss varnished figure if possible. I think I managed to get pretty close? (Minifigs). 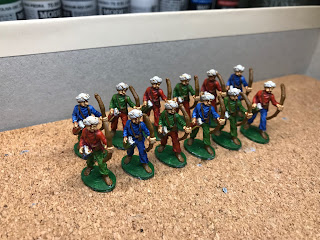 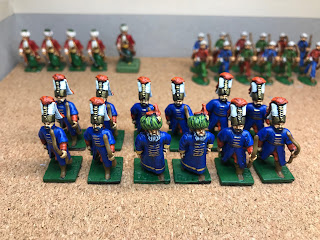 Above: Janissary archers, I love the huge 'onion' turbans on the commanders, green was the requested colour! (Minifigs). 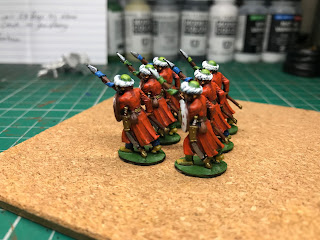 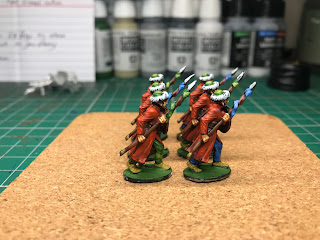 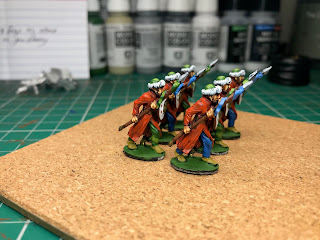 Above: Turkish spearmen by Ral Partha. 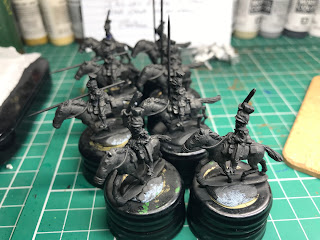 Above: gas mask wearing horses, next in line for JBM. 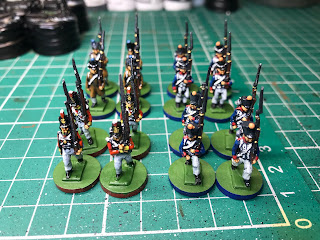