Romans - a slight scale issue but progress made!

I have not been neglecting my 'DBA' project, but things did come to a temporary halt while I sorted out a slight problem I faced with the scale of some of my Romans. Hinchliffe code AR1 is a wonderful figure representing a Legionary with pilum behind a large shield, and I painted the first 8 as you see below. However, when I painted a base of AR2 'Light infantry', it became very apparent that the latter was much smaller than the former in scale, and as much as I tried to ignore this it bothered me! AR8 'Asiatic Archer' looked closer to AR1 to me, so I painted a 4 figure base of these and they do scale up much better. Looking through the range I saw AR31 'Auxiliary infantry attacking' so ordered some with a view to replacing the painted AR2 codes. These are indeed chunkier castings that match both the other Roman codes and the Brits so problem solved. For some reason that I assume is connected to the re moulding process (?)Roman codes AR2 and AR3 (slinger) are indeed smaller than the rest of the range, not a major problem but a heads up to anyone considering buying the Roman range.

The next issue to be solved was that of the Roman shield design. As said above AR1 is a great figure, but when I ordered the Veni, Vidi, Vici shield transfers they did not fit, the slightly raised rim of the shield being a little wide. I had in the meantime ordered up 20 of code AR34 'Legionary attacking' and these arrived bearing slightly larger shields with thinner rim and a more accurate curvature typical of the period.  They also come with nice separate cast pilum (I was expecting wire 'spears') so all good there. Had I been familiar with the range from the start I would no doubt have gone with code AR34 for my basic Legionary figures, but having painted 8 of AR1 I wanted to be able to use them too. Solution was ( after much head scratching) to order the shield transfers designed for the 20mm HaT Romans, repaint the shield rims red and Bingo! looks good enough to me at least. I will now crack on with both codes to produce two 5 base Legion units each of 20 figures  ....... somewhere down the line I think 'Double DBA' (yes, it does exist) beckons. 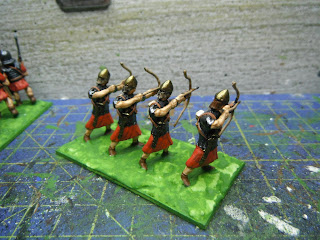 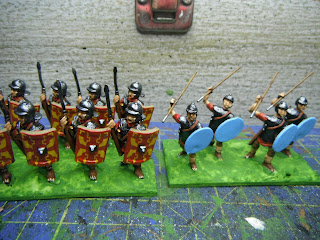 So with the Romans sorted I turned my attention back to the Hairy Brits of which I had the first 8 figures half painted. The shield designs were a bit of a puzzle for me, I found painting Celtic style swirls a problem with even the finest brush, but persevered to what you see below. For the next 8 however I want more typical oval shields so a bit of conversion work is required, and a quick file job on a test figure produced the result you see below, not too bad and will provide some contrast in the units. I also plan to try fine art pens to line and detail shield designs and for those swirls.

All in all I'm now happy with things and have a good stock of castings laid in from the Hinchliffe Summer Sale, with figures reduced to 75p each from 90p, about 80 castings per side, two chariots and a fine Roman catapult. Time to crack on! 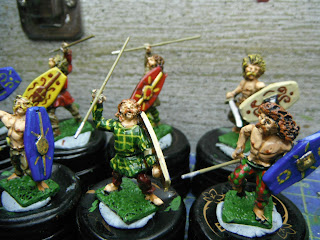 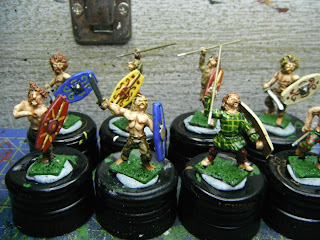 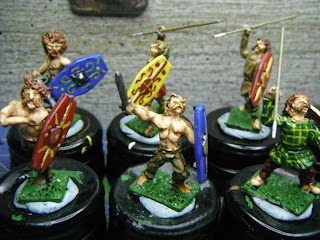 Finally: I received an email sent via 'Wellington Man' from 'Rob G' who is currently working on his own Romans v Britons project. Many thanks for the comments Rob and for the wonderful picture of your conversion work, I hope that you will not mind me sharing it here by way of inspiration?  I love the rounded shields and the animation and shield designs are fantastic.