Bit tight on hobby time again recently but I have been working on pulling together the large number of Russian tank models that I acquired some time ago in readiness for some Flames of War armour based encounters. The models are a mix of old resin/metal models by Battlefront, more recent plastic Battlefront models and some Plastic Soldier Company tanks. They all sit together quite well although I can see some variation in scale but overall not bad at all. I'm still working on final finish and all need varnishing to seal the decals etc but I can play game with them at least. The 20 tanks represent a Regular Tankovy Company (a couple of T34's still have Guards markings) around the time of Kursk. They breakdown as follows:

So twenty T34's in all, in just 3 hefty sized platoons and command tanks! That;s quite a force to be reckoned with on it's own, but I also have a regular infantry platoon of 8 rifle/mg bases and a 3 base HMG platoon in support. The list requires the infantry to be motorised with the addition of 4 captured German half tracks for which I have the models as yet unpainted. Finally for now I have a Sturmovik aircraft, a hefty 200 points but a lovely little model!

I gave the infantry (Forged in Battle 15mm) a quite fast paint job having first stuck them all down on the plastic FOW bases. They were drybrushed with Vallejo 'Russian uniform' I tried to leave some black areas as shadow to add depth. Highlights were a touch of Ivory mixed with the Russian Uniform. Equipment was varied with Khaki and brown, flesh was picked out with sunny fleshtone alone, I usually paint a basecoat of medium brown, but as the figures do not have exaggerated facial features I went with the single colour for speed although I may redo this later. Base edges painted Flat Earth before texturing with dark flock (so no need to colour the base), and a final addition of static grass to finish them off.  I restocked my static grass last week but for some reason was sent the 10mm version by mistake and I only noticed once it was on the bases, all looked a bit too shaggy. Gave the grass a trim up with my trusty snips. I'm now cutting the stuff down by hand before use until I can get a replacement!

The Sturmovik also got a quick paint job, copied from the HO version I painted for my Bolt Action Soviets. I do like the little flight stands and dice supplied with these lovely little models.

So some pictures, massed T34's on the prowl, with infantry and air support. Still a bit of work to do on the tanks and bases. Need to add the small infantry command bases one the bases arrive from eBay. Germans coming next. 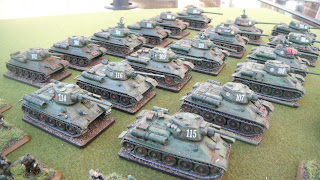 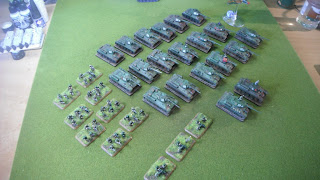 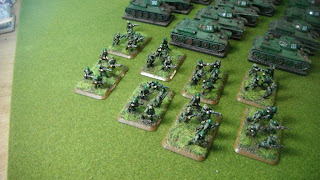 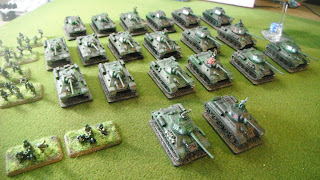 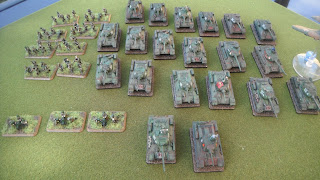 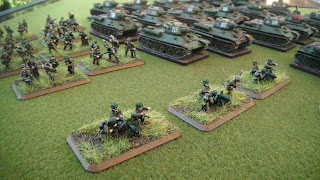 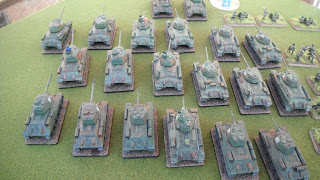 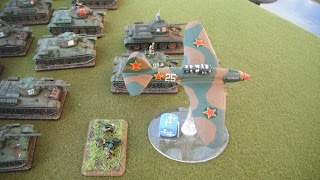 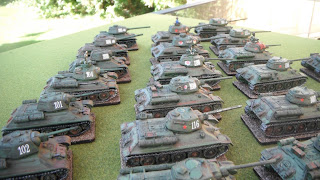 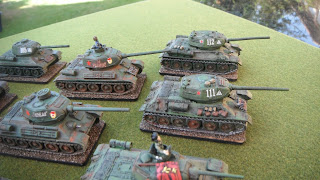