The bases for my hedge sections arrived from ERM a few days ago and I wasted no time in getting them based up and decorated. The 3mm bases now bring my bocage up to around 30mm tall, so I guess that's around 12 feet in scale height roughly, sufficient to conceal any 15mm infantry figure and anti tank gun and it will even conceal my Sturmgeschutz,( the StuG's with their low profile), Jagdpanther and even my Shermans just about. Won't conceal a Tiger though, not completely, but given the 'at least half' rule in Flames of War, they still offer some cover. So I now have 10 feet of bocage completed and I'm still waiting on a few feet of stone wall and lots of trees from Timecast to finish off. 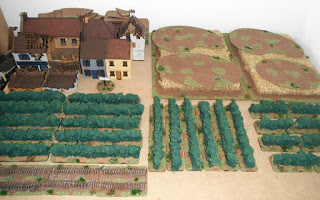 Having looked at the FoW rule book missions and watched all of the 'Boot Camp' videos as well as the dynamic duo of Warren and Dave from Beast of War, who's ' Flames of War For The Win' videos first got me into this period and game, I think I'm going to start with a purpose built table 5' x 3'6" (in old money!) as it's certainly a decent size for most games. I'm just keen to get going now with some games, been revising and testing the rules, but I just want to get a couple of small forces on the table to start me off. Now the plan is to teach this game to a couple of local friends who have expressed an interest, so I need a reasonable grip of the game before I do this. The slightly reduced table size will allow me to build a once piece board with raised wooden edges that I can use downstairs in the dining room or upstairs in the spare room where it can be left set up.

I have also painted a few of the 28mm plastic Warlord German infantry to see what I could do. I'm still not sure I want to go with this scale, I could do Bolt Action in 20mm and save myself a lot of money and painting time, as they work with the existing buildings and hedges etc. With some BA figures selling at £3.50 for a single 28mm metal 'character' (officers, NCO's etc) they are very expensive, but of course you don't need so many of them. I think for now I'll paint up some as display figures for my shelves and see how it goes.

Mostly done, they do need a magic wash followed by further highlighting and facial work before I'm happy with them, but it feels good to have painted a few figures again after an enforced lay off. 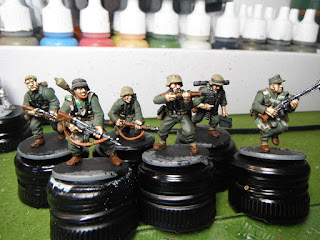