It's been a while since I posted here so I thought I'd just let everyone know that enthusiasm for the Napoleonic period remains high and I hope to be back to fighting battles again shortly. I've been busy painting commission work, but leave the evenings free for work on my own projects.

The 80mm hexes have not yet been started on, a test print of the graphics looked a bit naff to be honest so I'm trying to figure how best to use the new hexes. First I'll try to get some nice sharp prints of the terrain tiles on decent quality paper which should improve things.

I realised that I have left off the 'Waterloo Project' page when I was playing with the tabs, so I'll replace that as I want to keep that longer term running and will be painting new units towards the game shortly. I'm going to order some Baccus Scots Greys, Brunswickers and Dutch Belgians to begin with.

Meantime here's a shot of our very old lady Bump posing on my painting table last night. We think she's at least 16 years old now, and the three newcomers (now almost as big as Bump) seem to treat her with much reverence and respect. She has never been the most cheerful looking cat I have to say, but she just purrs away contentedly anyway. 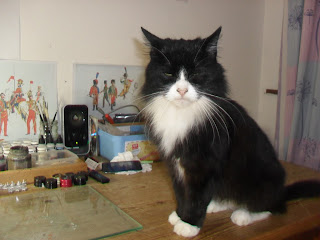