Having given my hill hexes a touch of texture to match the board I decided it was time for some tabletop action. I still plan more work on the main board in terms of improving the overall look, but for now its OK.

I placed 16 bases per side on the table and fought a straight encounter battle. I decided against trying to write the game up in detail, but rather to enjoy myself in playing the game. The game had a real Napoleonic feel to it under the C&C N rules. IN the centre the French placed 3 battalions on Legere in front, supported by a further 4 battalions and light cavalry. The Allies were in strength on their right flank, quickly moving to secure the village to their front which they held throughout the battle. On the Allied left were battalions of Portuguese infantry supported by British cavalry and artillery, who held back from crossing a stream to their front as French troops lined a ridge and deployed two batteries directly facing the Portuguese position. The main thrust of the French attack came in the centre, where deployed on a quite narrow front they advanced 3 battalion columns deep, the Legere battalions clearing the woods, crossing the stream and attacking uphill against the British defenders. Artillery fire failed to stop them and they swept forward, capturing a battery and forcing the second to fall back before it too was destroyed. It looked bad for the allies at this point, as two infantry battalions went the same way as the guns, taking the commander of the allied centre with them, killed by a single dice 'sabre' throw following the routing of the unit he was attached to.

In reserve were two battalions of Foot Guards, sitting on the British baseline. Lack of 'centre' command cards had allowed the dire position in the centre to develop, but now the Guards were ordered up to halt the main French attack. These two elite battalions, five blocks strong and firing with a massive six dice each when stationary opened fire on the already battered legere, routing one and forcing another to retreat. French line infantry moved up to replace them but again the steady fire of the Guards swept them back off the hill. The guards continued to hold the hill for the rest of the game, but allied losses were already heavy at this point of the game (4 to 2). On the Allied left the French now switched the attack onto the Portuguese, French cavalry charges forcing two battalions into squares, removing two cards from the command hand. French guns that had been forced to retire from the ridge under heavy fire were now ordered back up again and began to fire into the squares, causing a gradual loss. Pinned in square by the cavalry the Portuguese were unable to form line, unable to move and taking heavy casualties. At this point the VB score was 3 French losses to 7 Allied. The battle was over, a victory for the French, in spite of being driven back in the centre, and failing to take the village on the left.

It was a great game to play, and in true Commands & Colors style was fast and packed full of incidents. The allied hand was poor, lacking in centre section cards. They moved quickly on the right flank in securing the village with five units which then mostly sat in a holding position, firing out from the protection of the houses at French troops. Picking up a 'Fire and Hold' card was lucky for the allies at a critical moment, the volleys from the guards decimating the French to their front.

I played 6 command cards per side, dicing for first move (French). The images below were taken during the game at different stages. 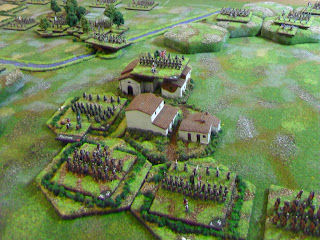