Well, that's another week flown by so that's just 3 weeks now before we head back to the UK. Packing is underway and I have bought several strong boxes in readiness for the 40mm collection.

Meantime I made this little Spanish Guerrilla 'command' base to use up 3 spare figures I had left in my drawer, just a bit of fun. The Marines are being posted to my daughter back in the UK for when I get back. I did weaken and place an order for 12 of the Flashing Blade Cacadores mentioned previously, ordered via the Fightin' 15's webstore, they were posted next day to here in Spain so hopefully could be here by end of the week. They will just see me over the final period and give me a little something to focus on beside moving! They will comprise a two base unit of skirmishers and are armed with rifles. 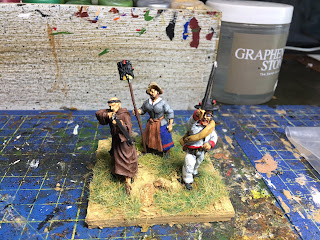 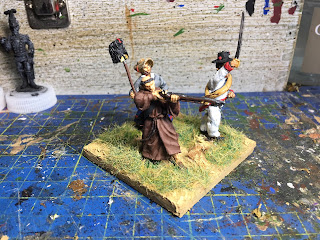 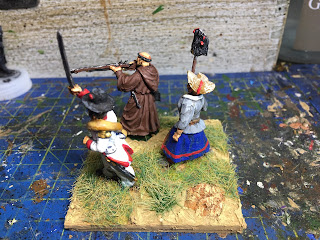 I now also have on order the S&S Polish Guard lancers pack and command pack from Andy at OG for when I'm back, in addition to the 2 guns for my RHA. On the subject of RHA I have received the first couple of photos of the rocketeer conversions. The officers pose has been tweaked, hand on hip and head turned slightly, I really like this one. The other guy will be in the act of loading a rocket onto the launch frame and I am also having the rammer figure made open handed to take a second rocket. Work in progress. Digital conversions take the project to a whole new level and are pretty cheap to have done from the original files. 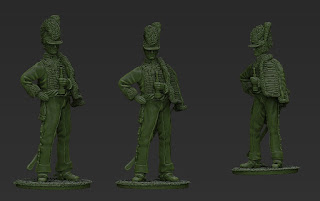 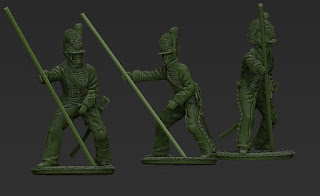 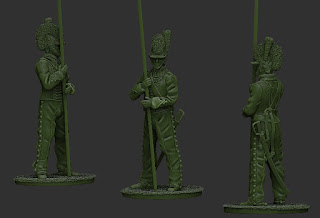